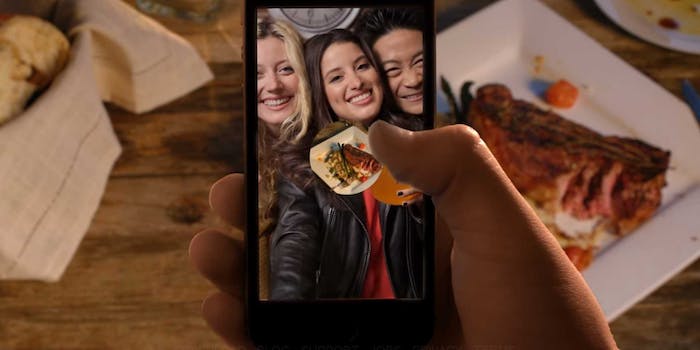 This is definitely the PG version.

Anyone who’s ever introduced Snapchat to a parent or other “mature” relative knows the awkwardness of explaining an app that’s oftentimes associated with sexting. Now imagine what it must be like to explain the app to middle-age advertising executives.

To address this dilemma, Snapchat has created a slide deck filled with important facts about its app and examples of some of its fun use cases. The slide deck, courtesy of Digiday, begins with an explanation of the company’s guiding philosophy: “We believe in the integrity of conversation—personal, unguarded, and of the moment. That’s how it is with in-person conversations, and that’s how we think it should be with mobile conversations as well.”

On the slide that defines a “Snap,” the company consciously avoids providing any examples that are even a little bit raunchy. “People send Snaps of their morning commute, late night nachos, and everything in between,” the slide says. “Some Snaps are crazy, some more mundane, but all Snaps are personal—raw moments, not just pretty pictures.”

Example Snaps include: a group of girls smiling for the camera with a text bubble reading “Support Sistas”; a girl with a digitally-added crown and the caption “Bow down for the queen”; and a well-dressed man turning away from the camera accompanied by the text “Basic” and “That lawyer look.”

Even on the slide for Snapchat Stories, one of the company’s newest feature, the document only hints at one of its most popular uses: “There is no limit to the number of Snaps you can add to your Story, and no rules for what you post. Anything goes.”

Anything indeed. And much of it is more risqué than the picture on the Story slide, which is that of a girl holding up a coffee cup with the caption, “This coffee isn’t working.” Anything goes indeed!

“Brands, sport teams, celebrities, and more are utilizing Snapchat to connect with fans,” it explains in a section called “Now It’s Your Turn.”

“We recommend experimentation. Learn what it’s like to create, what Stories fans ﬁnd most compelling, and ultimately, what your Snapchat voice is.”

The presentation ends with advice on how to promote corporate Snapchat accounts and model Snaps from brand accounts like “girlshbo” and “grubhub.”

Don’t wait another second. Recommend Snapchat’s slide deck for businesses to the corporation in your life!

H/T The Verge | Photo via Snapchat