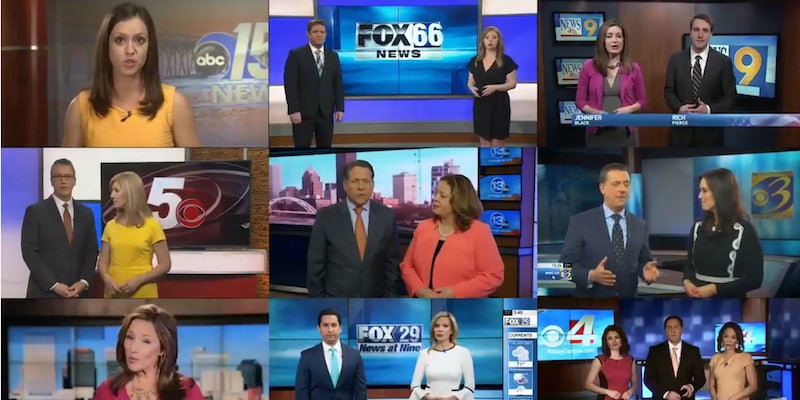 It says speaking to the media could 'have huge implications.'

Conservative media juggernaut Sinclair Broadcast Group continues to face criticism for forcing its TV stations to air an eerie promo about fake news. Now the company is in damage control mode as it attempts to protect its image. A memo obtained by FTV Live warns employees at local Portland news station KATU to avoid the press and not answer any complaints from angry callers.

“Please DO NOT answer any questions or get into any discussion with callers, as they try to navigate to someone internally. Most importantly, don’t talk to any press about this issue,” it reads.

Apparently written by the general manager at Sinclair, Robert Truman, the brief message starts with an apology but goes on to threaten anyone who speaks out against the “must-run” segment, “I will remind you that giving statements to the media or sharing negative information about the company can have huge implications.” Truman urges journalists to redirect all inquiries back to him or KATU.com where they can file a written complaint.

How America's largest local TV owner turned its news anchors into soldiers in Trump's war on the media: https://t.co/iLVtKRQycL pic.twitter.com/dMdSGellH3

The company has been under the spotlight after Deadspin put together a compilation clip showing anchors from dozens of Sinclair news outlets reading off a pro-Trump script like an army of robots. The video spread rapidly through social media, prompting outrage from people who recognize the dangers of consolidated news. The country’s largest owner of local TV stations defended itself by calling the promo “standard practice in the industry.”

“Not that you would print it, but do you understand that every local TV station is required to ‘must run’ from its network their content, and they don’t own me,” David Smith, chairman of Sinclair Broadcast Group, told the New York Times. “That would be all their news programming and other shows such as late-night talk, which is just late-night political so-called comedy.”

The Fake News Networks, those that knowingly have a sick and biased AGENDA, are worried about the competition and quality of Sinclair Broadcast. The “Fakers” at CNN, NBC, ABC & CBS have done so much dishonest reporting that they should only be allowed to get awards for fiction!

President Donald Trump swiftly came to Sinclair’s aid, claiming that rival networks like CNN and CBS are “worried about the competition and quality of Sinclair Broadcast.” The right-leaning media company is known for broadcasting favorable coverage of the president.

Sinclair is currently being aided by the FCC to complete a $3.9 billion buyout of Tribune Media. Once it goes through, the company will expand its reach to more than 70 percent of American households. The merger has caused a rift in the FCC, with Democratic commissioners Jessica Rosenworcel and Mignon Clyburn hitting out at fellow members for relaxing rules that prevented single entities from reaching more than 39 percent of Americans.

We have reached out to Sinclair Broadcast to learn more about the internal memo.