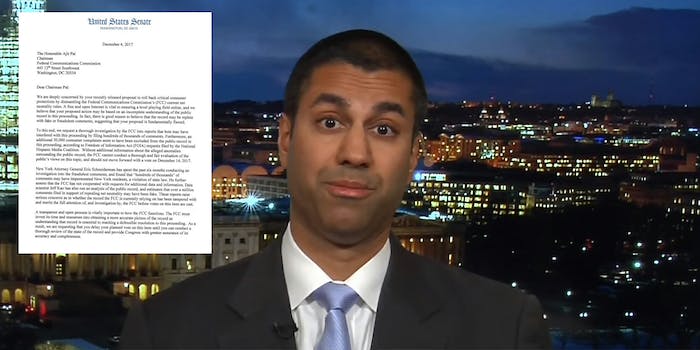 The fake comments submitted to the FCC are an issue, they say.

Nearly 30 senators have called on the Federal Communications Commission (FCC) to delay its vote to dismantle net neutrality rules due to concerns they have over fake public comments made to the agency earlier this year.

Earlier this year, the FCC opened up public comment on its plans to gut net neutrality rules that fall under Title II of the Communications Act. Net neutrality, a founding principle of the internet, requires that all internet traffic be treated equally–for example, barring an internet service provider (ISP) from slowing down Netflix in favor of their own streaming service.

The public comment portion has come under scrutiny in recent months. New York Attorney General Eric Scheiderman has been investigating how someone used American identities to post fraudulent comments on the FCC’s website.

Those fake comments have 27 senators questioning whether or not the FCC is voting on the proposal to dismantle net neutrality with the true feelings of Americans in mind.

“A free and open internet is vital to ensuring a level playing field online, and we believe that your proposed action may be based on an incomplete understanding of the public record in this proceeding,” the letter, addressed to FCC Chairman Ajit Pai, reads. “In fact, there is good reason to believe that the record may be replete with fake or fraudulent comments, suggesting that your proposal is fundamentally flawed.”

27 senators are calling on the FCC to delay its vote on repealing net neutrality rules, citing concerns that the agency's public comment file may be filled with fake comments. pic.twitter.com/sqmSQzZ6s4

The letter says without “additional information” about the fake comments, the FCC cannot have a “thorough and fair evaluation of the public’s views” on net neutrality before the vote to strip away the regulations on Dec. 14. The letter asserts that more than 1 million comments in favor of repealing net neutrality could be fake.

The push-back against the FCC’s plan to repeal net neutrality has been fierce. Earlier this year, hundreds of websites participated in the Internet-Wide Day of Action to Save Net Neutrality, and a We The People petition calling for Pai to resign has more than 100,000 signatures, theoretically requiring the White House to respond to it.  Protests are also scheduled across the country this week at Verizon stores.