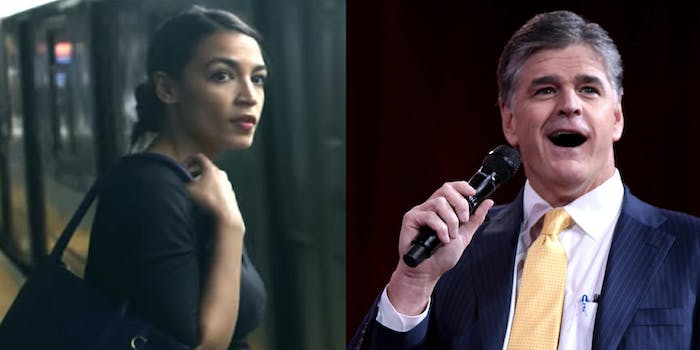 Hannity asked his audience if they wanted 'these people running the country?' The internet responded: Yep.

Fox News pundit Sean Hannity attempted to downplay the upset victory of Alexandria Ocasio-Cortez, a democratic socialist who won in a Democratic primary in New York on Tuesday night, by rattling off a list of her polices as the “modern Democratic party.”

While Hannity was trying to make it seem like a bad thing, the internet erupted in glee.

The Fox News host rattled off on Ocasio-Cortez’s agenda while it was displayed on a large graphic. The list included: Medicare-for-all, women’s rights, criminal justice reform, abolishing ICE, and free public college tuition.

“Many are hailing Cortez as a rising star on the political landscape, but in reality her views, her policy positions, are actually downright scary,” Hannity said, adding: “This is the future. This is your modern Democratic party.”

After airing a clip of Ocasio-Cortez saying she would be in support of impeaching President Donald Trump, the host continued:

“The only difference between the self-proclaimed socialist that you just saw and the rest of the Democratic party is: she’s actually more honest,” he said.

Hannity may have thought Ocasio-Cortez’s vision for the United States was “downright scary,” people online struggled to find ways to agree with him.

Dear Conservatives friends: Sean Hannity just broadcast this as a reason to be against Ocasio-Cortez. For the life of me, I'm trying to come up with even one reason why everything on this list isn't awesome. Help me out and let me know why you're against some of these things? pic.twitter.com/JqZ5YZDPxT

@seanhannity just described Alexandria Ocasio-Cortez as the new face of the Democratic party, and said her policy positions pointed to a bleak future, calling them "downright scary." So when he showed this, I was expecting to find something "downright scary." pic.twitter.com/GLBPJ3sRRx

SHE WANTS TO HELP SENIORS!!! WHAT NEXT???

shoutout to sean hannity for accurately listing some of the reasons ocasio-cortez won https://t.co/iYTX3VaC9q

The Fox News host ended the segment by asking his audience “do you really want these people running the country?”

Judging by the response to his segment online, it’s likely a good portion of people do want that.