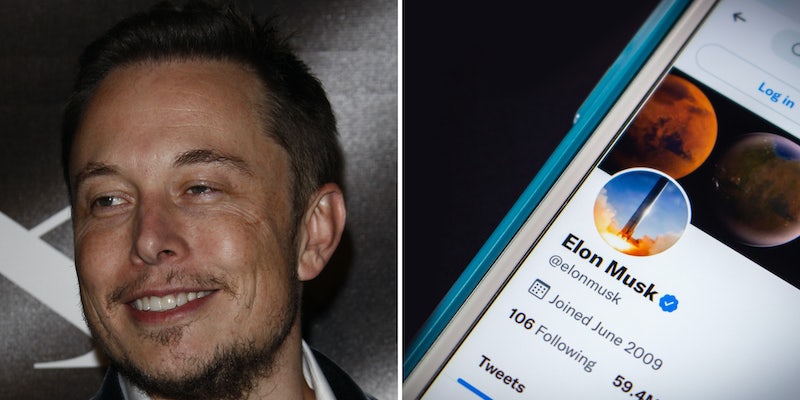 Elon Musk has offered to buy Twitter. The news set off a firestorm of reactions, largely along partisan lines. Conservatives love the idea. Liberals hate it.

Last month, Musk purchased 9% of the company’s stock, triggering intense speculation that he wants to take over. On Thursday, that speculation proved prescient when Musk revealed that he’s offered to buy the entirety of Twitter.

In a letter to Bret Taylor, the chairman of Twitter’s board, Musk said he’d invested because he believes in Twitter’s “potential to be a platform for free speech around the globe.”

“I believe free speech is a societal imperative for a functioning democracy,” he added.

He wrote that after investing $3 billion in Twitter, he came to the realization that it “will neither thrive nor serve this societal imperative in its current form.” To live up to Musk’s vision of Twitter’s potential, he believes the company needs to be taken private—with him as its sole owner.

If Twitter balks, Musk threatened to take his money and go home.

“My offer is my best and final offer and if it is not accepted, I would need to reconsider my position as a shareholder,” he wrote.

To some, Musk’s offer represents all that’s wrong with the economic system generally and him specifically.

“Elon Musk is why to abolish billionaires,” opined @AnandWrites. “…When people are allowed to acquire this much concentrated influence, they will inevitably manspread economic power into every other form of power.”

Many suggested Musk should spend the funds on nobler pursuits than buying his favorite social media platform.

“$43 Billion can solve a lot of world problems but Elon Musk would rather buy an app,” tweeted Keith Edwards, communications director for Florida Commissioner of Agriculture and gubernatorial candidate Nikki Fried (D).

Conservatives took the counterpoint. They believe Musk would bring back all their favorite banned accounts, ranging from former President Donald Trump to neo-Nazis and QAnon conspiracy theorists.

“If @elonmusk pulls off buying Twitter, we’re going to see one of the biggest meltdowns ever by the left,” tweeted Keith and Kevin Hodge, the conservative twins more commonly known as the Hodgetwins.

Similar discourse occurred across conservative social media platforms that people banned from Twitter have been relegated to.

One idea united people across the political spectrum. They suggested Musk invest in or simply buy one of the fringe right-wing platforms that compete with Twitter.

One platform would be happy to take Musk’s money—though it doesn’t appear willing to sell him the entirety of the company.

Musk has not responded to Gab’s offer. Twitter also has yet to say whether it will accept Musk’s offer.

In a statement, Twitter said that its “board of directors will carefully review the proposal to determine the course of action that it believes is in the best interest of the company and all Twitter stockholders.”