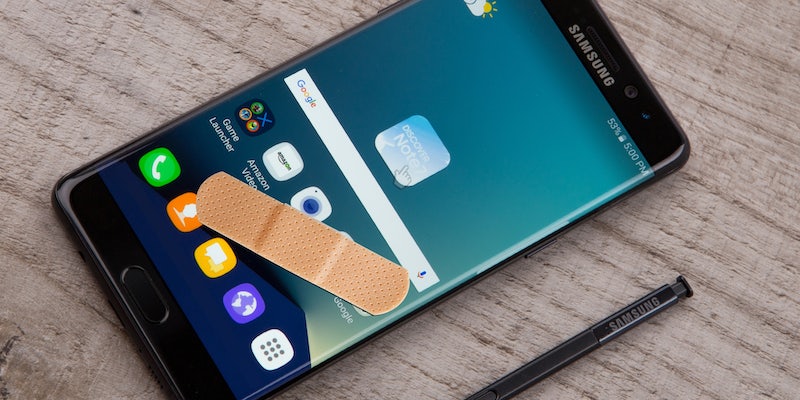 Can a band aid fix an explosion?

There are new reports of Galaxy Note 7s exploding nearly every day, and Samsung is doing everything it can to try to minimize the damages. According to a report from the Associated Press, its latest attempt will be a software update that will limit the device’s battery to a 60 percent charge.

The quick fix was announced by the Korean manufacturer on the front page of Seoul Shinmun, a South Korean newspaper. In an advertisement taken out by Samsung, it notes that anyone who chooses not to participate in the recall of the device will be able to install the software patch.

“It is a measure to put consumer safety first but we apologize for causing inconvenience,” the advertisement from Samsung said.

The downloadable band aid will cap the battery charge at 60 percent full in hopes of preventing it from overheating, which has in turn resulted in explosions.

It will be made available to Galaxy Note 7 owners in South Korea starting on September 20, 2016. It’s unclear if Samsung will make the update available to others overseas. The company is reportedly in talks with mobile carriers to roll the update out to devices.

There is also no indication if the update will be mandatory or if users will be able to choose to download the fix.

The Daily Dot reached out to Samsung for clarification as to whether the update will be available outside of South Korea and if it will be compulsory. Samsung did not answer those questions. Instead, a spokesperson provided the following statement:

“Samsung is continuing to work with the CPSC and our carrier partners to develop and evaluate solutions that are best for US Note7 owners. No action will be taken without the approval of the CPSC. Customer safety remains our top priority.”

According to Samsung’s notice of recall issued earlier this month, there had been 35 cases of exploding smartphones as of September 1, 2016. That number has since increased, with additional reports cropping up in Australia and the United States.

The explosions have caused considerable destruction, including causing over $1,300 in damages to a hotel, totalling a vehicle, and burning a six-year-old. The United States Consumer Product Safety Commission (CPSC) has advised owners of the handset to stop charging and using the device.