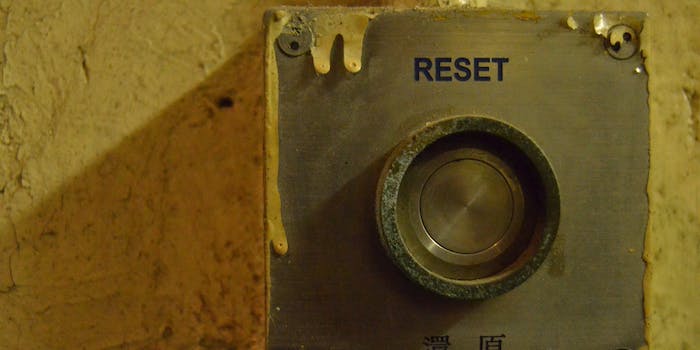 One year after Snowden leaks, privacy campaign seeks to ‘Reset the Net’

“They depend on our mistakes—mistakes we can fix.”

Precisely one year after the first Edward Snowden leaks revealed the U.S. government’s bulk surveillance of the Internet, a coalition of websites and Snowden himself are urging everyone on the Web to “Reset the Net,” by arming themselves against future invasions of privacy.

The campaign against government spies and complicit tech companies is led by nonprofit Internet rights advocacy group Fight for the Future, and gives Internet users a “Privacy Pack” to install rudimentary protection against bulk data collection and snooping, as revealed by the Snowden leaks. In a successful effort to bring the big tech firms who collaborated with the National Security Agency on board, Google has joined Reset the Net,  promising to make end-to-end encryption available for Web-based email through a new Chrome extension.

A coalition of other companies and orgnaizations, from Reddit and Dropbox to Greenpeace and the Electronic Frontier Foundation, have also signed on to spread the Reset the Net message.

“It’s been one year since Edward Snowden blew the whistle on the U.S. government’s abusive spying programs. In that time Congress and the Obama Administration have failed to protect our rights,” said Tiffiniy Cheng, cofounder and codirector of Fight for the Future. “Now, they’ve got a rebellion on their hands as tech companies and Internet users work together to directly intervene in mass surveillance and block the NSA and its kind from the Web.”

In support of Reset the Net, Snowden released a statement via his attorneys in Russia, hailing June 5 as “the moment when we turn political expression into practical action,” and urging users, “don’t ask for your privacy. Take it back.”

“Today, we can begin the work of effectively shutting down the collection of our online communications, even if the US Congress fails to do the same. That’s why I’m asking you to join me on June 5th for Reset the Net, when people and companies all over the world will come together to implement the technological solutions that can put an end to the mass surveillance programs of any government. This is the beginning of a moment where we the people begin to protect our universal human rights with the laws of nature rather than the laws of nations.”

As well as running a “splash screen” to promote the campaign, many sites are tightening up their own security to prevent government collection of visitors’ data by installing the more secure browser technology.

Fight for the Future knows that the Privacy Pack software for computers and mobile devices will make spying harder, but not impossible. Unlike its successful 2012 campaign to halt the U.S. government’s ill-conceived Stop Online Piracy Act (SOPA), Reset the Net is more concerned with changing the actions of individuals, since it doesn’t expect governments to stop snooping any time soon.

“Folks like the NSA depend on collecting insecure data from tapped fibre,” says the campaign video. “They depend on our mistakes—mistakes we can fix.”