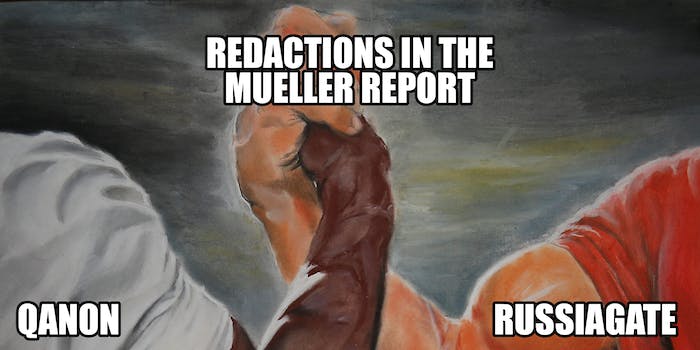 There's about to be some weird synergy online.

The term “horseshoe theory” has become a popular shorthand to describe ideas embraced by both the far-left and far-right political spectra, usually for different reasons.

Essentially, it says that the extreme fringes of both sides of the political aisle have more in common than the moderate wings of the liberal and conservative ideologies.

A number of social scientists believe horseshoe theory isn’t anywhere near as applicable as popular writing makes it out to be, and isn’t really an effective measure of the political goals of the fringes. But one area where the beliefs of the far-left and far-right do have eerie similarities is in conspiracy theories.

It’s common for there to be considerable overlap between the extreme ends of the spectrum regarding political and medical conspiracies, and especially alternative medicine. A good example is President Trump’s recent embracing of several un-evidenced health claims that have proponents on both the far right and far left, including that vaccines and autism are related (they aren’t,) and that wind turbines cause cancer (they don’t.)

The similarities extend to the investigation by Special Counsel Robert Mueller into Russian interference in the election. Mueller became a folk hero to liberals who believed that his investigation would stop Trump’s administration and put the president in handcuffs. And Mueller also occupied a lofty, if somewhat confusing, position in the QAnon conspiracy theory, where at first he was secretly working with Trump to take down pedophile rings, before morphing into a controlled agent of the deep state working against Trump.

#QAnon conspiracists claim Robert Mueller’s probe is a cover, and that Donald Trump — to save the republic at the expense of his own reputation — hand picked him to investigate and thwart a coup d'état by the "Deep State," which believers allege is run by child molesting elites pic.twitter.com/rTTHBxSblF

The conclusion of Mueller’s investigation is still unknown, due to his report not having been publicly released. But even just the brief summary provided by Attorney General William Barr was enough to send the conspiracy theorists on both sides off to grab their shovels and dig in harder.

Slate described Rachel Maddow’s post-Barr letter theorizing about what’s actually in Mueller’s report as a “wall of crazy.” And QAnon believers scrambled to reconcile the lack of mass arrests after Mueller finished up with Q’s original theory about Trump and Mueller working together.

At some point, possibly soon, the Mueller report will be released, likely with heavy redactions related to personal information and ongoing cases. And when it’s released, both the report and its redactions will be examined by conspiracy theorists of both sides not for what they actually say, but for what they want it to mean.

New: House Dems are preparing for battle to get the full Mueller report—including grand jury material, which Barr is now scrubbing from the report in a “very elaborate redaction process,” per Dem staffers. Nadler willing to go to court to get it. https://t.co/XmhVpNlQEQ

On the most recent episode of Chapo Trap House with Rolling Stone reporter Matt Taibbi, host Virgil Texas linked the two extremes together, both demanding transparency from Mueller so as to prove their own closely-held theories—one exonerating Trump, and the other damning him.

“The report will have redactions, and [the Russia scandal believers] will demand the un-redacted report, just like the QAnon people,” he said. “We will be in a situation where both the Q people and the Resistance people will be demanding the same un-redacted report.”

It’s almost certain that redactions in the report will be folded into the conspiracy theories that surround it. Russiagate believers will attack Barr as being complicit and trying to hide the worst parts of the report to protect Trump. And QAnon believers will try to figure out the exact number of spaces in redacted words and come up with complex theories as to what’s actually in there and how it related to QAnon drops.

Both sides of this argument have spent the better part of two years developing and refining their closely held arguments, and nothing that happens going forward will likely change that. The idea that both sides will retrench their beliefs in the face of them not coming true should be familiar to any longtime watcher of conspiracy theories.

Nor is assuming that redactions are part of a grander conspiracy new to the Russia scandal.

Before that, conspiracy theorists obsessed about the “missing 28 pages” of the 9/11 Commission report, related to Saudi links to the attack. Despite nobody knowing anything about what they contained, the 28 pages became a rallying cry for anti-Bush Democrats and right-wing conspiracy theorists alike.

Finally, the pages were declassified with minor redactions in 2016, with little new information being revealed, and no massive conspiracy collapsing. The smoking gun that both sides had promised simply didn’t exist.

In fact, the government tends to over-redact, not to protect vital state secrets, but out of an abundance of caution for keeping people’s names private.

In both the 2016 study and the 9/11 report pages, the mere act of redacting a document, no matter what the document is or what the redactions are hiding, implied the existence of a cover-up. It’s almost certain that the Mueller report, which will likely have a great number of redactions and omissions, will fuel the same conspiracy theories on both ends of the horseshoe.

That’s not to say that Barr or other DOJ officials should be overly heavy-handed with redactions. While the protecting of sensitive information is vital to future intelligence operations, the public has a right to know what the taxpayer-funded inquiry into the 2016 presidential election found.

And the more the report is redacted, the more even centrist thinkers on both sides will find reasons to be suspicious.

But it’s clear that even as the Mueller investigation goes from active to complete, the conspiracy theorists on both sides are not going to move off their position at all—and will continue to see exactly what they want to see in the Special Counsel’s findings.