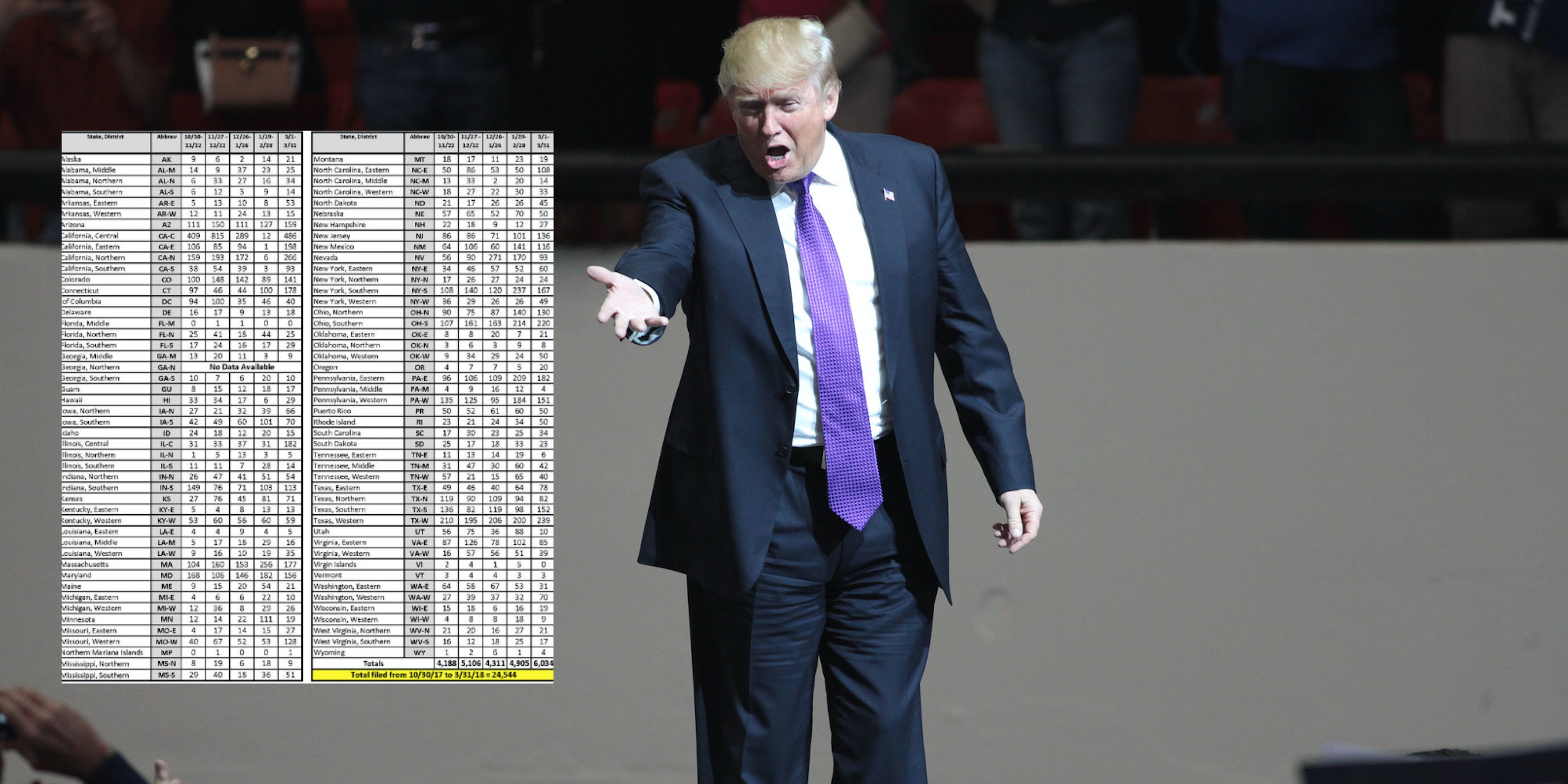 Inside the 25,000 sealed indictments fueling the QAnon conspiracy

There certainly is smoke, but no fire.

The central claim of the QAnon conspiracy theory is that President Donald Trump’s Justice Department has filed thousands of sealed indictments against Democratic leaders, Hollywood celebrities, and wealthy elites.

All are guilty of a variety of misdeeds, horrific sex crimes, affiliation with the “deep state,” and/or intent to harm the president and his administration.

And when the time is right, Trump will order the indictments unsealed, prompting a massive wave of arrests, with the accused tried in the field and sent to Guantanamo Bay for indefinite detention.

For months, the theory has lurked in the shadows of the internet, but this week it exploded when Q followers made their presence known at a Trump rally in July, prompting an outpouring of media coverage.

6,000 ppl arrested on sex trafficking
30,000 sealed indictments
25,000 orders to seize assets
Ex-Presidents all over the World arrested#CNN is worried about Stormy Daniels
Break out from your chains
Come out of the bubble

The World is changing right before your eyes#Qanon

And at the heart of the conspiracy is the 25,000 sealed indictments.

While it seems like an outlandish claim, #QAnon believers do have one very real piece of evidence at their disposal: the existence of sealed indictments is public. They can be found by searching the U.S. government’s court documents access system, PACER.

PACER charges only a nominal fee for search results, and is open to the public, providing at least some information on every case currently in the federal district courts.

So working with their own resources, #QAnon researchers have made extensive use of PACER, seemingly finding tens of thousands of sealed criminal cases in district courts all over the country and compiling them in a spreadsheet.

And even more startling, that number seems to be accelerating, far outpacing the normal number of sealed criminal indictments in a year, which, according to a 2009 report from the government’s own Federal Judicial Center (FJC), is just 1077.

In November, shortly after the #QAnon conspiracy theory first broke, the number of sealed criminal indictments handed down in just the first few weeks of November was reported as 4,289. Then, on New Year’s Day, that number had jumped to over 9,000. By March 4, it was 18,500. And by early April the numberstood at 24,500 – all apparently filed since October 30th.

So does the seeming existence of nearly 25,000 sealed indictments on PACER mean that “The Storm” is really coming, and we’re in for a huge wave of arrests?

To get to the bottom of the claim, it’s important to first understand what exactly an indictment is, and why it would be sealed.

An indictment is simply a formal accusation of serious wrongdoing, sought by a federal prosecutor, voted on by a grand jury, which usually leads to an arrest.

The Fifth Amendment requires the federal government to obtain an indictment from a grand jury in order to prosecute someone for a felony, and it’s important to remember that only grand juries hand down indictments. Judges can’t do it, nor can federal agencies. Or the president.

An indictment is unsealed when made public, typically when a suspect is arrested

Sealing indictments is a routine legal procedure, done in most cases so that the subject of the indictment doesn’t know they’re about to be arrested. Some criminal cases are sealed due to the age or high-profile nature of the defendant, while some are sealed for dubious or unclear reasons.  (Neither PACER nor the Federal Judicial Center responded to requests for comment.)

Indictments are also not the only court documents that are sealed. Search warrants are routinely sealed; as are applications to tap phones or log calls coming to or from a phone (often known as “pen registers”), obtain vehicle tracking devices, or read email accounts.

Not all sealed documents are on PACER, and not every sealed criminal case file that comes up in PACER is an indictment. In fact, it’s likely that most aren’t—which is where the FJC report comes in.

The 2009 report, prepared at the behest of the Judicial Conference’s Rules Committee and seeking “a study of completely sealed cases in the federal district courts,” did indeed find 1,077 sealed criminal cases among the over 66,000 criminal cases found in PACER for 2006.

So the conspiracy theorists number of sealed felony indictments in a “normal” year would seem to be right. Except reading on in the report makes it clear that many of those sealed criminal cases were NOT indictments.

In fact, the report only lists 284 out of 1,077 cases as “sealed indictments” that the writers were able to obtain no information on.

24,544 sealed indictments in the past 5 months. That is unheard of. If you've been involved in any kind of human rights abuse (e.g. child sex trafficking) or corruption, you should be afraid….VERY afraid. Also see EO signed on 21 Dec. https://t.co/NrHTNLf0zj pic.twitter.com/4IzjG3mSAz

So what are the rest? 241 were sealed because of either an ongoing investigation or to protect a cooperating defendant. 180 were prosecutions of juveniles, and presumably not something Donald Trump or The Storm would take much solace in. Another 70 were misdemeanor drug offenses—again, not the stuff of conspiracy theories.

Finally, 226 were what the report calls “warrant-type cases.” These are search warrants, wiretap/pen register applications, and requests for tax records. None should be counted in a tracking of “sealed indictments.”

Essentially, the number #QAnon is using is factually correct, but leaves out vital context that explains that relatively few of the 1,077 are actual criminal indictments. Most are routine court matters.

So then what about the massive number of sealed case found files in PACER? The #QAnon researchers aren’t making them up—a random sampling of PACER records from the district courts of Washington, D.C. and the Eastern District of Virginia shows the number to be more or less accurate.

It doesn’t, because routine court matters in district courts are usually handled by lower-level magistrate judges. And the FLC report found over 15,000 sealed magistrate judge cases, with many others not in the Electronic Court Filing system that feeds into PACER.

A random sampling of these files showed 83 percent of sealed magistrate cases to be warrant applications or tracking devices. They are NOT indictments, but #QAnon’s number includes them anyway. We know this from their own methodology.

A five-page PDF called “Search for Sealed Indictments on Pacer.gov” purports to train “researchers” in how to find sealed indictments. It includes not only all sealed cases, but cases clearly being handled by magistrates that are clearly NOT indictments.

Obviously, without access, it’s impossible to know what’s an indictment and what’s a routine document. And it’s possible that the government IS sealing more indictments, given the Trump administration’s ramping up of gang, drug, gun, and immigration prosecutions, a response to the “American carnage” Trump spoke of in his inauguration speech.

But we do know, at the very least, that the massive numbers of “sealed indictments” being thrown around by #QAnon believers is inaccurate, and isn’t being compared to previous years correctly.

Meanwhile, sealed indictment mania is a conspiracy theory that feeds itself, and will continue to, by adding more numbers to an essentially meaningless tally, and pretending it’s a portend of things to come.

And as of July 2020, discussion of sealed indictments and QAnon have mostly petered out. None of been unsealed after years of promising, and the supposed mass arrests still have not been carried out.