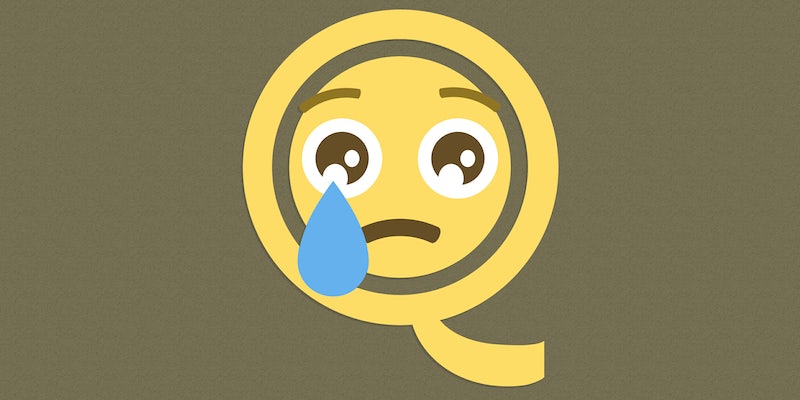 QAnon finally makes contact. What’s next for his rowdy followers?

The movement is becoming more violent and desperate.

Until the weekend, the supposed government insider known as “Q,” who has spent over a year dispensing cryptic clues and nuggets of information regarding an upcoming violent purge of the deep state, had gone almost entirely dark.

After a flurry of posts in early January, many that advanced a conspiracy theory that Supreme Court Justice Ruth Bader Ginsburg was secretly on life support, Q had only posted twice from Jan. 13 to Feb. 9 —and one post was a stock photo of jet fighters. But Q returned with another dozen posts this weekend, cranking up the mythology once again and making references to secret reports, “blockades,” “placeholders,” controlled media, and what appears to be a disturbing call for believers to turn against their families.

Just a new #QAnon post trying to get believers to turn against their families. But it's nothing like a cult, no sir. pic.twitter.com/rfgIGekmS8

Q has gone silent before, sometimes for several weeks at a time, only to return with a slew of new posts and new riddles to decode.

But this latest lapse and return comes at a time when the movement that has built up around Q is on the verge of losing faith or walking away. Without consistent guidance from Q, believers in the conspiracy theory are desperately picking through past posts looking for clues, while dissecting the minutiae of President Donald Trump’s tweets, speeches, and statements for hidden meaning.

Drop 648
1/31/18
Timing is everything.
Did you miss the most important line of the entire speech?
Activation code.

But the movement is also becoming more violent in its rhetoric and desperate in the theories it’s putting out. There are even splits between members who believe that arrests are imminent, and those who think the entire point of the movement isn’t about scooping up deep state cabalists, but merely about being aware of the existence of the deep state and its cabalists.

So where is QAnon going? Is it reaching a crescendo of violence, or fizzling out like so many conspiracy theories and scams before it? It’s difficult to tell, because every time Q vanishes, he seems to return. But there are several troubling developments that demonstrate that while the mass arrests aren’t coming, the movement’s believers haven’t gotten that message.

QAnon social media has always been full of demands that deep staters be hanged, put in front of firing squads, etc. But since Q has mostly gone silent, there’s been a noticeable uptick in QAnon acolytes either advocating for perceived enemies to be eliminated, or threatening to do it themselves.

Hmm. Utah is allowing capital punishment via firing squad. Who is our favorite US Attorney who is from Utah? What is he investigating? How many sealed indictments again? #Huber #QAnon https://t.co/X7S8Hbno3U

Prominent QAnon “decoder” Liz Crokin recently posted on a livestream that if mass arrests don’t happen soon, “we are going to start seeing vigilante justice,” which she believes “could cause a civil war in this country.”

Crokin’s warning of QAnon believers taking to the streets made mainstream headlines, but she’s far from the only person who has either warned of or advocated some kind of vigilante uprising to root out the (non-existent) deep state pedophiles in the government and media.

The biggest QAnon forum on Reddit clone Voat is full of anonymous users declaring that they are “locked and loaded” and ready to fight, with believers fantasizing about Q unleashing the collapse of society, shooting and burying “looters,” going on a “million rifle march,” and “taking the situation into our own hands.” No effort is made to police any of these posts, and with the users entirely anonymous, it’s impossible to report them to relevant authorities.

Most of this rhetoric stays electronic. But it’s beginning to spill into the real world, with a QAnon believer named Buckey Wolfe allegedly murdering his brother with a sword, and another QAnon believer, who posts on Twitter as “TheLightReports,” arrested for trespassing on the grounds of the Virginia governor’s mansion.

There’s also the fire set at Comet Ping Pong Pizza, the hub of Pizzagate conspiracy theories. The arsonist hasn’t been caught, but since QAnon and Pizzagate are so closely linked, it won’t be surprising if whoever set the fire is also a Q believer.

A deep dive into prominent QAnon social media shows a movement flailing for purpose and direction. When Q posted regularly, he kept his followers busy with an endless stream of riddles, rhetorical questions, fragmented clues leading nowhere, and out-of-context pictures.

But without Q, the movement is simply following prominent conservative news stories, whether they’re about the supposed migrant caravans heading north toward the U.S. and Mexico border, the new late-term abortion laws in New York and Virginia, or Ruth Bader Ginsburg’s health. They’re also focusing more on generic targets of conservative anger like Nancy Pelosi and Adam Schiff, rather than on the targets of Q drops.

So much for “strong, independent women”. AOC and white sheep acted like mere puppets on a string. #LiberalismIsAMentalDisorder #qanon @RepAOC #MAGA https://t.co/wr6YCij2M0

And despite the movement holding up Trump as some kind of divine emperor, there was considerable anger at the president caving on his demand for a border wall and ending the government shutdown. Should Trump cave again and fail to deliver the wall after the three-week continuing resolution expires, Q believers will likely move even further away from their Trump worship, and toward general conspiracy crankery.

While the movement is flailing for a purpose, many members are so desperate for Q’s long-promised “something big” to happen that they’re biting on truly dumb hoaxes.

One of the most prominent was a rumor that QAnon nemesis George Soros had been arrested in Switzerland after being ratted out by Barack Obama, who himself had been charged with treason by a nebulous “Alliance” of white hats. Needless to say, it was a hoax.

There was also a surge of excitement among QAnon followers about a cryptic post on 4Chan that used similar syntax and language to Trump’s speaking style— with many believing Trump himself wrote the post as a way to let his followers know everything was OK. Trump is thought to post as part of the QAnon network of insiders, delineating his posts by signing them

“Q+.” And because QAnon originated with anonymous posts on racist imageboard 4chan, later moving to even more racist imageboard 8chan, the idea of Trump “returning” to 4chan for an update seemed appealing to believers.

Except it wasn’t, because the post turned out to be a hoax.

Someone on 4chan /pol/ answered a question as if they were actually Trump. And so of course some in QAnon community actually believe that Trump made a 4chan post.

(The post was on 4chan, not 8chan, as some in the QAnon community are claiming.) pic.twitter.com/mYKTrlkqXW

And there was the ever-growing conspiracy theory that Ruth Bader Ginsburg’s true health status is being obscured by the deep state, with the liberal hero either being kept alive through secret drugs or already dead and “on ice.”

Such a conspiracy has no evidence to support it and would entail the entire Supreme Court being in on a massive plot to fool the American public and the president alike—a president who could, in theory, just pick up the phone and call the Supreme Court to ask if RBG is still alive.

Mainstream social media sites continue to struggle to keep up with this movement, though Twitter has recently banned several prominent QAnon accounts for threats of violence. And all of this could change if QAnon returns with a flurry of new riddles and rhetorical questions. But for now, this is a movement that’s riled up and thirsty for some next steps.