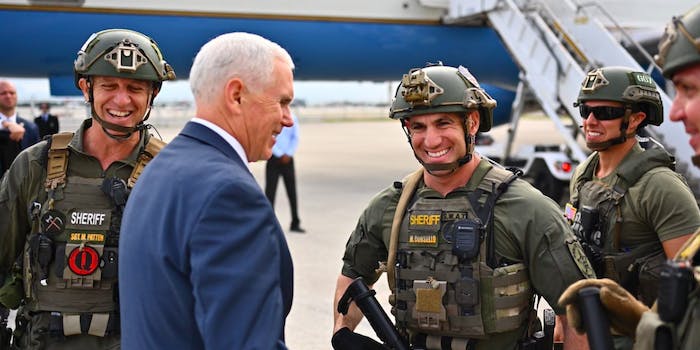 The officer, identified as Sgt. Matt Patten, was assisting with the vice president’s visit to Florida on Friday, along with the Broward Sheriff’s Office SWAT team. He was photographed wearing a large red patch with a black “Q” displayed prominently on his vest.

“Grateful for the courageous members of law enforcement who helped with my visit to Florida this afternoon. Thank you for everything you do to keep our communities SAFE. Great to meet you,” the vice president’s account originally tweeted, along with several photos of Pence and the law enforcement officers providing security for his visit.

According to BuzzFeed, which first reported the story, the vice president’s account took down the post shortly after they reached out for comment. The post was later restored, with photos including Patten cropped so as not to show him.

Grateful for the courageous members of law enforcement who helped with my visit to Florida this afternoon. Thank you for everything you do to help keep our communities SAFE. Great to meet you! pic.twitter.com/Lh9Udk5fr2

Pence’s office told BuzzFeed that the tweet was altered so as not to spread the conspiracy theory.

QAnon is the conspiracy theory that started on 4chan a year ago, centered around a mysterious figure called “Q,” so named for his supposed high-level government security clearance. Among other things, followers of the theory believe that many prominent Democrats are involved in a child sex ring and that Trump is going to put all of them in prison.

The Miami New Times reported that the Broward Sheriff’s Office didn’t know Patten was wearing the patch when he was sent to greet Pence.

“The patch is not authorized by BSO. This matter will be addressed immediately,” spokeswoman Veda Coleman-Wright told the New Times via email.

While the vice president’s office and the Broward Sheriff’s Office may have been appalled, QAnon believers jumped on the moment in the spotlight.

Why would VP Mike Pence tweet out a photo of himself with law enforcement that had a Q on his chest, then delete the tweet?

"The picture will be the signifier, the signifier will force the Q."#QAnon #WWG1WGA pic.twitter.com/fStUzynUTW

.@VP The deep state deleted that picture of you with a QANON soldier. Don't let them do that! #Q #QAnon #WWG1WWA pic.twitter.com/mJ1zzLt8fJ

Patten has reportedly served as a law enforcement official for 27 years, with a stint in the Broward County Sheriff’s Office of Homeland Security.