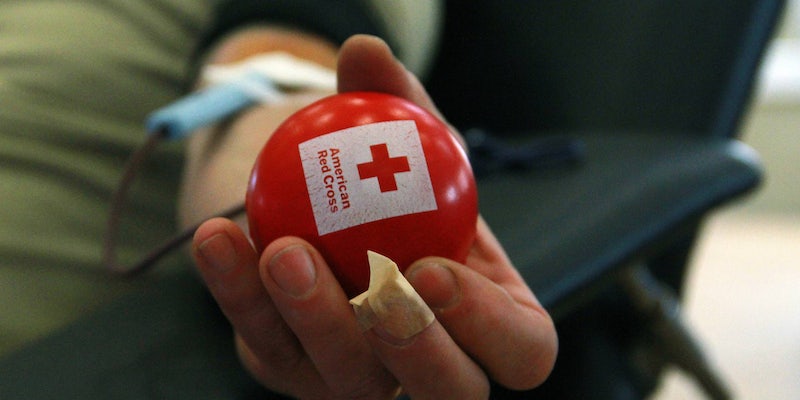 FDA requires gay men be celibate for 12 months before giving.

In the wake of the mass shooting at LGBT nightclub Pulse in Orlando, there is an urgent need for blood donations. Due to U.S. Food and Drug Administration (FDA) regulations, most gay and bisexual men are still barred from providing blood.

Last year, the FDA lifted the lifetime ban it had placed on men who have sex with men (MSM), though only in theory; the government agency still requires gay and bisexual men to be celibate for a full year before it will accept their blood. In contrast, heterosexual people are permitted to donate blood at any time regardless their sexual history.

There is little scientific evidence to suggest that preventing gay and bisexual men from giving blood accomplishes anything for public health. The American Medical Association in 2013 called for the ban to be lifted and suggested instead that donors be evaluated on individual level of risk and not on sexual orientation alone. The Red Cross, America’s Blood Centers and blood donation advocacy group AABB all likewise oppose the restriction based on orientation.

Despite loosening the restrictions on blood donations put in place in 1983, The FDA’s decision to maintain a 12 month deferral period for gay and bisexual men acts as a ban by another name.

In Orlando, there is a call for blood donors following the shooting that killed 50 and left over 53 injured and in need of medical attention. Gay and bisexual men are primarily unable to partake in the process despite the urgent need from members of the LGBT community affected by the tragic events.

There is an urgent need for O Negative, O Positive and AB Plasma blood donors after mass shooting at Orlando club @WESH

OneBlood, a blood center based in Florida, is reportedly screening all blood donations received and is not turning down donors. The Daily Dot has reached out to OneBlood for comment but has not received a response at the time of publication.

Blood center is overloaded with people wanting to give blood in the aftermath of the #Pulse mass shooting pic.twitter.com/rFAsbPdGGu

Plenty of people have rushed to give blood to help those in need, but the donor pool would be much wider—both in times of urgency and for general need—if gay and bisexual men were permitted to donate as others are. Nonetheless, restrictions that have been done away with by other countries continue to sideline the gay and bisexual male community.

Update 1:58pm CT, June 12: OneBlood has issued a response to reports that FDA guidelines have been lifted regarding their blood donations, indicating that the organization may still be turning away gay and bisexual men:

All FDA guidelines remain in effect for blood donation. There are false reports circulating that FDA rules were being lifted. Not true.