Reporting Comcast for violating net neutrality is easy, figuring out if it’s happening is hard

Being a beat cop for the open Internet may be harder than it looks.

Earlier this year, the Federal Communications Commission approved a regulation that made net neutrality the letter of the law. Enshrining the idea that Internet service providers shouldn’t be able to prioritize one type of Internet traffic over others, block or slow down entire classes of data, or charge content providers like Netflix or YouTube a fee to access a “fast lane” to consumers was a major win for Internet freedom advocates across the country.

As Ars Technica notes, the FCC has made a form on its website where people can file complaints that their ISP is violating net neutrality rules. 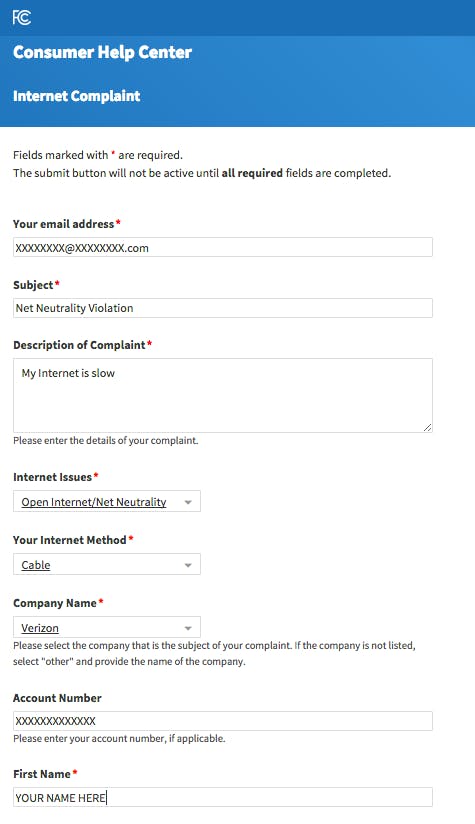 The form itself has existed on the FCC’s website for a long time and allowed people to file complaints against their ISPs for issues ranging from billing to privacy. However, determining if your connection is being illegally slowed down is tricky. Just because the Netflix stream at your apartment has been buffering for the past three minutes doesn’t necessarily mean your ISP is breaking the rules.

Last month Battle for the Net, a coalition of activist groups that pushed the FCC to adopt net neutrality, created a Web-based tool called the Internet Health Test as a way to root out ISPs not abiding by net neutrality. Internet Health Test works by analyzing the connections of its users to determine the rate at which traffic flows between interconnection points, the junctions at which different online networks connect to each other. If certain interconnection points are experiencing problems, it’s an indication that an ISP may be violating net neutrality.

When a user conducts an Internet Health Test, a process that only takes a few minutes, the tool pings a number of measurement points located outside of the network operated by the user’s ISP. By testing the health of those connections, the tool is able to determine if there’s congestions at all the different intersection points at the edges of the user’s ISP network. Done en masse, the test can aggregate the data of many different users testing different networks at different times of the day to tell if the problem is systematic and therefore likely a result of an ISP breaking net neutrality rules.

Timothy Karr of Free Press, a group that strongly advocates in favor of net neutrality and was a part of the Battle for the Net coalition, told the Daily Dot in an email that hundreds of thousands of users have taken the Internet Health Test. But conclusions about whether or not an ISP is illegally engaging in throttling can only be drawn from a larger dataset than a single person’s results.

“An individual test may be considered an aberration,” Karr wrote. “In order to make the case that there’s systemic throttling or degrading you need to perform several tests from different addresses and at different times. That’s what we’re hoping to show by gathering data from hundreds of thousands of separate tests.”

“I think participating in the Internet Health Test is the best thing an Internet user can do to gather comprehensive evidence of abuse,” he added.

Battle for the Net hasn’t published the results of its analysis on Internet Health Test data yet, but it plans on doing so sometime in the future.

So unless you work at an online video streaming company and an ISP offers to give you a fast lane to consumers for a price, sending any conclusive reports to the FCC’s new system may be a nebulous proposition.

However, that doesn’t mean it’s impossible for a random Internet user to uncover evidence of this type of throttling on their own. In 2007, Oregon-based engineer Robb Topolski noticed that no one was uploading any of the music files he had seeded on his computer through the peer-to-peer file-sharing program Shareaza. Topolski did some detective work that included tunneling his Internet traffic to make it appear is if it were originating in Brazil. He eventually concluded that Comcast, his ISP, was blocking file-sharing applications like Shareaza by sending fake data packets that appeared as if they were coming from end users telling the applications to disconnect.

The result was a scandal for Comcast and resulted in the company getting slapped by the FCC for its naughty behavior, but only after the blog post written by Topolski about his experience was followed up with a blockbuster story by the Associated Press. Had the FCC’s new reporting system been in place then, Topolski could have gone right to the source.

Correction: The article had been updated to more closely identify the approximate number of Internet Health Test users.