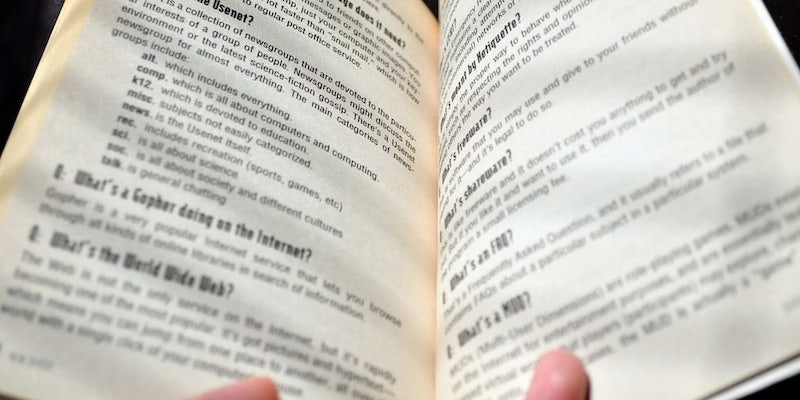 Here are all the words and phrases you need to know to understand net neutrality.

Learning the jargon is crucial to fully understanding the finer details of any niche topic, and net neutrality is no exception.

Since net neutrality is sure to be a topic of discussion for the foreseeable future, we’ve compiled a glossary of key phrases, concepts, and players. In lieu of an alphabetical list, we ordered the terms in a way that should put the entire debate around net neutrality into an understandable context.

Net neutrality: When all data are treated equally in transit across a network such as the Internet. Under these circumstances, network administrators cannot block or hinder certain content or applications. With net neutrality, everything—from the most critical announcement from the White House’s website to the silliest cat GIF—moves across the Internet onto your screen at the same speed.

Edge providers: This is fancy term for websites and mobile apps. The most commonly referenced edge provider in the net neutrality discussion is Netflix.

Internet service providers (ISPs): Companies that control the “last mile” of the network, or the actual wires and other infrastructure responsible for bringing the Internet to people’s homes, businesses, and mobile devices. By most accounts, ISPs would greatly benefit in the absence of laws ensuring net neutrality. The big players are Verizon and AT&T for mobile broadband, Comcast and Time Warner Cable for wired.

Paid prioritization: Without net neutrality on the Internet, ISPs could charge a fee to edge providers to deliver data to customers at higher speeds, thus the edge providers would be paying to have their data prioritized.

Fast lane: Open Internet activists say that without net neutrality, the Internet would be divided into tiers. Edge providers that are willing to pay ISPs could connect with customers through an “Internet fast lane,” while those unwilling or unable to pay would be at a disadvantage because they would be relegated to so-called “slow lanes.” Research has found that users are fast to abandon sites when they experience delays in load time.

Communications Act of 1934: Federal law that established the FCC as the regulatory body for communications. The law includes several sets of rules that communications companies must follow, depending on how they are categorized.

Open Internet Order of 2010: The most-recent set of net neutrality rules established by the FCC. The order attempted to ensure net neutrality by fulfilling three goals: no blocking, nondiscrimination, and transparency. Much of this order’s authority has since been revoked by the courts.

No blocking: Prohibited both wired and mobile broadband providers from blocking any lawful websites and applications. For instance, ISPs that offer telephone services, such as Comcast and mobile providers, could not block services such as Skype and Google Voice even though they are direct competitors.

No unreasonable discrimination: Rule that established that wired broadband providers can not “unreasonably discriminate in transmitting lawful network traffic.” Some degree of discrimination, for the purpose of network maintenance, was permissible.

Transparency: Required both fixed and mobile broadband providers to publicly disclose information such as network management practices and network performance.

Verizon v. FCC: January 2014 decision by the U.S. Court of Appeals in Washington, D.C., that struck down the no blocking and no unreasonable discrimination sections of the FCC’s Open Internet Order of 2010. The court ruled that the FCC does not have the authority to enforce net neutrality as its rules are currently written because of the way ISPs are currently categorized. Though the decision was a blow to net neutrality, the court left the door open for the FCC to reclassify ISPs in a way that would allow it to preserve the open Internet.

Information service: The basic reason the court ruled in favor of Verizon is because in 2002 (and 2007, for wireless broadband providers), the FCC categorized ISPs as companies that provide an “information service,” which is regulated under Title I of the Communications Act of 1934. The decision was a deregulatory act that the FCC said would “promote investment and innovation” resulting in “better quality, lower prices, and more choices for consumers.”

Title II: If reclassified as companies that provide a Telecommunications Service, ISPs could be regulated by the FCC under Title II of the Communications Act of 1934, which includes more than 100 pages of “common carrier” rules the commission could enforce on the companies. The Commission also has the authority to forbear from applying sections of Title II that it feels are not applicable to Internet providers. Title II is essentially the shortest legal leash the FCC could use to reign in ISPs.

Common carrier: Companies or organizations that transport people or goods and are regulated by a set of laws that ensure that the general public can benefit from the companies’ services—think telephone companies. Common carrier laws vary depending on the industry, but they generally prohibit common carriers from unreasonable discrimination against passengers, freight, or data, in the case of the Internet.

Notice of Proposed Rulemaking (NPRM): The fancy name for rules under official consideration by the FCC. In a 3-2 vote along party lines, the FCC approved a NPRM titled “Protecting and Promoting the Open Internet” on May 15 of this year. The proposal set forth a set of recommendations and questions to be answered regarding net neutrality. The commission will now take approximately four months to seek comments from the public and attempt to answer the questions it set forth before it votes on new open Internet rules.

The language in the NPRM is often vague, and many net neutrality proponents fear the FCC is learning towards allowing some form of an Internet fast lane. This is because the FCC suggested that it would prefer to use Section 706 of the Telecommunications Act of 1996—rather than Title II, as preferred by the most-vocal net neutrality advocates—as the legal authority through which it establishes the new rules.

Section 706: Two-paragraph clause in the Telecommunications Act of 1996. If the FCC uses Section 706 as the legal authority in attempt to reestablish net neutrality, it would allow the commission to regulate ISPs in attempt to “promote competition in the local telecommunications market” and “remove barriers to infrastructure investment.” Though, it’s not totally clear how that would allow the commission to ensure net neutrality.

Tom Wheeler: Wheeler is the Chairman of the FCC, and quite possibly the person whose decisions will impact net neutrality most significantly. Though Wheeler has consistently fashioned himself as a champion for net neutrality, reports have suggested that Wheeler is considering rules that would allow for an Internet fast lane. Many net neutrality activists are quick to reference Wheeler’s past work as a lobbyist for the cable industry. But Wheeler cast himself as a former entrepreneur and investor who realizes the value of the Internet at the May 15, saying, “I will not allow the national asset of an open Internet to be compromised. I understand this issue in my bones.”

Now that you know the net neutrality jargon, here’s some reading that will help you further understand the issue:

This article was originally published May 25, 2014. You can support net neutrality by participating in the Internet Slowdown Day.