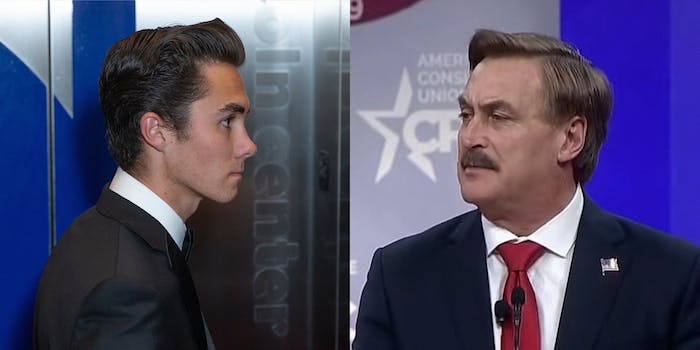 The pillow wars are underway.

A century from now, after post-Second Civil War reunification is a distant memory, young children will wander up to the grandparents, eyes full of curiosity, and ask why they still choose to sleep on a shredded memory foam pillow instead of the constitutionally mandated down standard that was forced through Congress at the end of the war

“Your grandfather,” they will sigh, wistfully, “was a Groyper. And he didn’t change his avatar to a frog pursing its lips so you could insult our bedding.”

Behind the left-right schism in America right now, the pillow wars are heating up.

Last month, former Parkland shooting survivor David Hogg announced he was launching Good Pillow, his “ethical” competitor to My Pillow. My Pillow is owned by Mike Lindell, who is one of former President Donald Trump’s staunchest supporters, and who pushed election fraud lies. Despite those lies ending in a riot at the U.S. Capitol, Lindell continues to push for Trump’s supposed electoral victory.

And while Hogg has faced criticism from his own former allies for capitalizing on his fame to produce a pillow, it apparently struck a nerve with those who believe Lindell and his far-right, conspiratorial politics are the nation’s one true pillow.

So much so that far-right troll Jack Posobiec built several website redirects, buying the domain PillowHogg dot com and sending people to Lindell’s My Pillow website.

He’s also pushing a promo code to boost sales. Use Poso for $40 off a My Pillow.

Posobiec also registered several other domains, in case people might accidentally type in the wrong domain for the not yet up and running pillow competitor, presumably to trick people into purchasing the conservative pillow and not the liberal pillow at some point in the near future when Hogg’s company launches and people start pillow shopping.

According to Posobiec, he’s had My Pillow for a year and still loves it. And it appears some people online have shared his enthusiasm for both buying My Pillows and trolling Good Pillow.

And at the rate we are going, years from now, asking someone not to sleep on a shredded memory foam-style pillow (the preferred filling of Lindell’s bedding) will be akin to calling on a school to remove a Confederate general’s as its namesake.

And we will start this fight all over again.