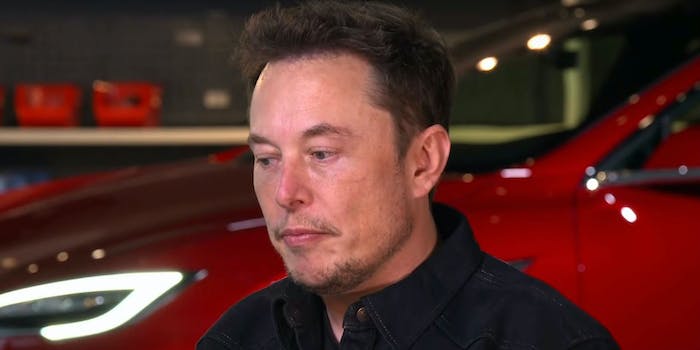 'It's worse than I thought.'

One of the world’s most prominent champions of automation has a serious problem with his robots.

In an interview with CBS Good Morning, Elon Musk admitted the production line for the Tesla Model 3 relied too much on robots, which are in part to blame for the vehicle’s delayed shipments. When CBS host Gayle King raised concerns of whether robots were slowing down production, Musk quickly responded, “Yeah, yeah I agree…they do.” He also said the company needs more humans at its plant in Silicon Valley.

The business magnate cited a “crazy complex network of conveyor belts” Tesla couldn’t get working and eventually scrapped as another reason for the Model 3’s tardiness. Additionally, packing in so many complex technologies into the first line of electric cars only added to the slowdowns.

“We got complacent about some of the things we thought were our core technology,” Musk said. “We put too much new technology into the Model 3 all at once—this should have been staged.”

Musk also said in the interview he was “under stress,” and it’s clear why. In July, he explained Tesla would go through “production hell” to ship 500,000 Model 3s annually by 2018. He initially wanted to make 5,000 vehicles a week but cut the goal in half after delays. Musk personally took over the production line earlier this month, which now produces slightly more than 2,000 vehicles a week.

“It’s worse than I thought,” Musk admitted, before explaining how he pulls all-nighters and often sleeps on a narrow sofa in a conference room.

The revealing interview was filled with eye-opening statements from a CEO who was once so confident in how Tesla produces vehicles he said the company’s competitive strength would be its factory, not its cars.

Perhaps the most amusing part of the interview came when Musk addressed his overly ambitious deadlines. Fresh off explaining how Tesla failed to reach anywhere near its goals, Musk promised a three-to-four-fold production increase in the second quarter of this year. He expects those who pre-ordered a Model 3 to receive the vehicle in the next three to six months—or six to nine months later than promised.