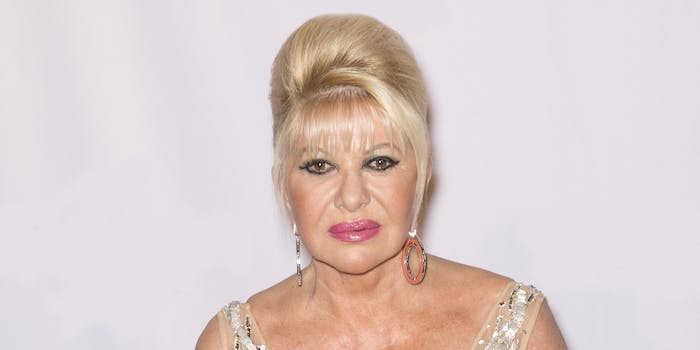 Left-wing Twitter users are suggesting Trump murdered Ivana to get out of a deposition.

Left-wing Twitter users are suggesting that former President Donald Trump had his ex-wife murdered in order to delay an ongoing civil investigation in New York, causing right-wing users to erupt in outrage.

Trump’s 73-year-old ex-wife Ivana Trump was found deceased in her Manhattan home on Thursday after firefighters responded to a report of cardiac arrest. City officials have stated that there was no indication of foul play and are working to determine the cause of death.

The former president responded to the death on Thursday in a statement on Truth Social, referring to Ivana as a “wonderful, beautiful, and amazing woman, who led a great and inspirational life.” Ivana was the mother of Trump’s three oldest children, Donald Jr., Ivanka, and Eric.

Yet Ivana’s death came just one day before Trump, Donald Jr., and Ivanka were scheduled to be deposed as part of a civil investigation into the Trump organization by New York Attorney General Letitia James. The death led James to agree on Friday to temporarily delay the depositions.

Many left-wing Twitter users saw the turn of events as suspicious and began claiming that Ivana may have been “Epsteined,” a term used by those who believe that convicted sex offender Jeffrey Epstein didn’t commit suicide in jail but was actually murdered.

“Well well what a surprise,” one user wrote. “Was Ivana #Epsteined ? NY AG delays depositions of Trump and two children after death of Ivana Trump.”

Others argued that a murder could have been plausible given Trump’s alleged defense of his supporters’ view that former Vice President Mike Pence should have been hung during the Capitol riot on Jan. 6, 2021.

“People are saying that Ivana was Epsteined,” another said. “I don’t know, but Donald Trump tried to have his VP killed … so it’s not like it’s out of character.”

The fact that Trump hasn’t canceled his political rally in Arizona on Saturday, however, has also spurred suspicion among his detractors.

“That’s some BS there…if you can’t make it to your deposition then you shouldn’t be able to make it to another hate rally the very next day,” @DPrevailed said. “Ivana Epstein’d to get out of deposition wouldn’t put it past them. Despicable to say the least.”

As stated by city officials in New York, no evidence indicates that foul play was involved in Ivana’s passing. Ironically, supporters of the former president, who are no stranger to conspiracy theories themselves, expressed outrage at the allegation.

“First Democrats said Ivana had been ‘Epsteined’ insinuating she was murdered, and now they’re saying the ‘wrong Trump’ died,” the user @RealVinnieJames wrote. “THIS is the true face of the Democrat; evil, heartless, vindictive, destructive, and if you don’t believe me, read the replies to my recent tweets. -VJ.”

“Those of you posting Ivana got Epsteined are part of the 13% that think the country is on track under Biden,” another conservative Twitter user said. “That means you’ve been wrong about everything.”

Some Twitter users pushed back on the response from Trump supporters given their history of promoting outlandish and debunked claims regarding everything from COVID-19 to the 2020 presidential election.

“Seeing right wingers losing their shit because people are saying Ivana was Epsteined is hilarious,” @carogonza2 said. “These are the same people who said Hillary killed Seth Rich. Same people who said there was a pedo ring in the basement of a pizza joint that had no basement. It’s hilarious.”

Given the ever-increasing political polarization in the U.S., such conspiracy theories will almost certainly continue into the foreseeable future.