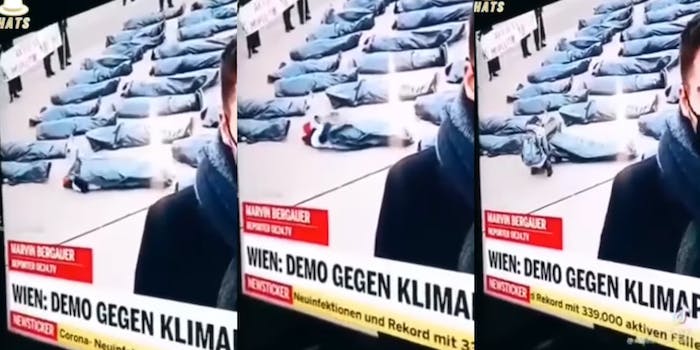 Welcome to the Monday edition of Internet Insider, where we dissect online disinformation—one dumb conspiracy at a time. Today, we take a look at people thinking they found a COVID ‘crisis actor.’

Conspiracy theorists are spreading a video online that they believe shows a “crisis actor” pretending to have died from COVID-19.

But as you’d expect, the claims are entirely false.

The footage emerged on Facebook last week and purported to show an individual in Germany moving around inside of a body bag during a live news broadcast.

The allegation appeared to be that the individual had been hired to play dead alongside others as part of a sinister effort to overblow the dangers of COVID.

Crisis actors are commonly brought up by conspiracy theorists, for instance believers of the QAnon conspiracy theory thought Gabby Petito was one because she appeared in a music video to promote gun violence awareness.

The video shows one individual being approached by a cameraman while moving around alongside at least 20 other body bags.

“Crisis actor in Germany forgets he’s filming on TV,” a caption on the video states.

Some users in the comments used the clip to attack the media, suggesting that reporters had been involved in the fake scenario.

“What liars our news media has become,” one commented.

The footage was also present on other social media apps such as Twitter, Telegram, and TikTok.

Yet conspiracy theorists’ characterization of the video was wrong in just about every way possible.

Believe it or not, the best gin is non-alcoholic 🍸

It’s booze…without the booze? With people becoming more wellness-focused, non-alcoholic drinks have become more popular. So what do you drink when you’re not drinking? If you’re a gin lover who loves the classic taste of juniper berries, we’ve got you covered. These are the best non-alcoholic gin brands for guilt-free nightcaps and pain-free mornings.

For starters, the footage did not emerge from Germany. The video actually originated from Vienna, the Capital city of Austria.

And the so-called crisis actors were actually protesters.

But was their protest at all related to COVID? Nope.

In fact, the original news cast clearly shows other individuals with protest signs standing next to the body bags.

A chyron used by the media organization covering the event states “Wien: Demo Gegen Klimapolitik,” which translates to “Vienna: Demo against climate policy.”

Despite claims surrounding the footage being easily debunked, the misrepresented clip continues to go viral across social media.

It appears as if the “do your own research” crowd once again failed to do its research.

Many who falsely blamed Saget’s death on the vaccine now claim he was actually murdered.

In an interview, Greene compared the Capitol Police to Adolf Hitler’s secret force in Nazi Germany. Only she called them the “gazpacho.”

The white nationalist complained that his fans would also call Hitler a ‘fakecel.’