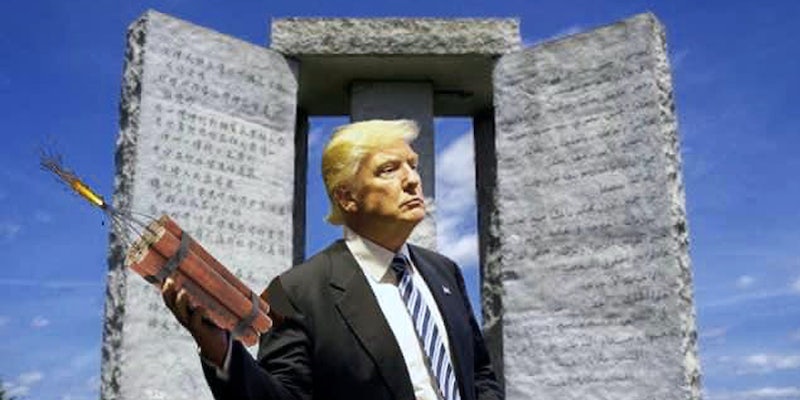 The image came after a local candidate called for the 'Satanic' monument to be demolished.

A doctored image of former President Donald Trump holding a bundle of dynamite next to the Georgia Guidestones circulated online just weeks before the monument was bombed.

The granite structure, located in the city of Elberton, Georgia, is composed of five concrete slabs and has been the focus of conspiracy theories for years due to its references to population control.

“Maintain humanity under 500,000,000 in perpetual balance with nature,” one of the messages on the monument says.

On Wednesday, the structure was partially destroyed in a bombing that is reported to have taken place at around 4:00am on Wednesday, July 6. Shortly after, the Georgia Bureau of Investigation (GBI) released surveillance video of the explosion as well as footage of a vehicle presumably fleeing the scene.

The GBI later announced that the structure was completely demolished by authorities due to safety concerns.

As noted by VICE, news of the bombing was met with celebration by some prominent right-wing figures in Georgia. Kandiss Taylor, a Republican candidate for governor in Georgia, suggested that God had struck down the “Satanic Guidestones.”

“God is God all by Himself. He can do ANYTHING He wants to do,” she tweeted. “That includes striking down Satanic Guidestones.”

Taylor had also promised in May to demolish the monument if she were elected while labeling herself as the only candidate willing to oppose the “Luciferian Cabal.”

“I am the ONLY candidate bold enough to stand up to the Luciferian Cabal,” she tweeted. “Elect me Governor of Georgia, and I will bring the Satanic Regime to its knees—and DEMOLISH the Georgia Guidestones. Join me in my fight to #TearThemDown!”

It appears photoshopped images of Trump bombing the Georgia Guidestones began to appear online in the following days and weeks. A Twitter user known as Marie Of Fatima, who claims in her bio that the COVID-19 vaccine and PCR tests contain parasites, shared the image on June 20.

Other versions began to pop up as well, such as one that included the caption “Ready?” on top of the image.

The Daily Dot reached out to the Elbert County Sheriff’s Department to inquire whether police were aware of the images. A woman who answered the phone claimed that she would inform investigators. A phone call by the Daily Dot to the GBI went unanswered.

After initially praising the bombing on Twitter as an act of God, Taylor defended herself in a video address on Facebook and warned the media not to associate her with anything that is “not legal and in the right order.”

“If anyone says that I do not believe in law and order and that I would support vandalism, that I would support going outside of our legal system to demolish something, to vandalize something, they are a liar,” she said. “I would never support that. In fact, I think anyone who goes on private or public property to destroy anything illegally should be arrested.”

The GBI thus far has declined to comment on whether it has determined any possible motivations behind the bombing.