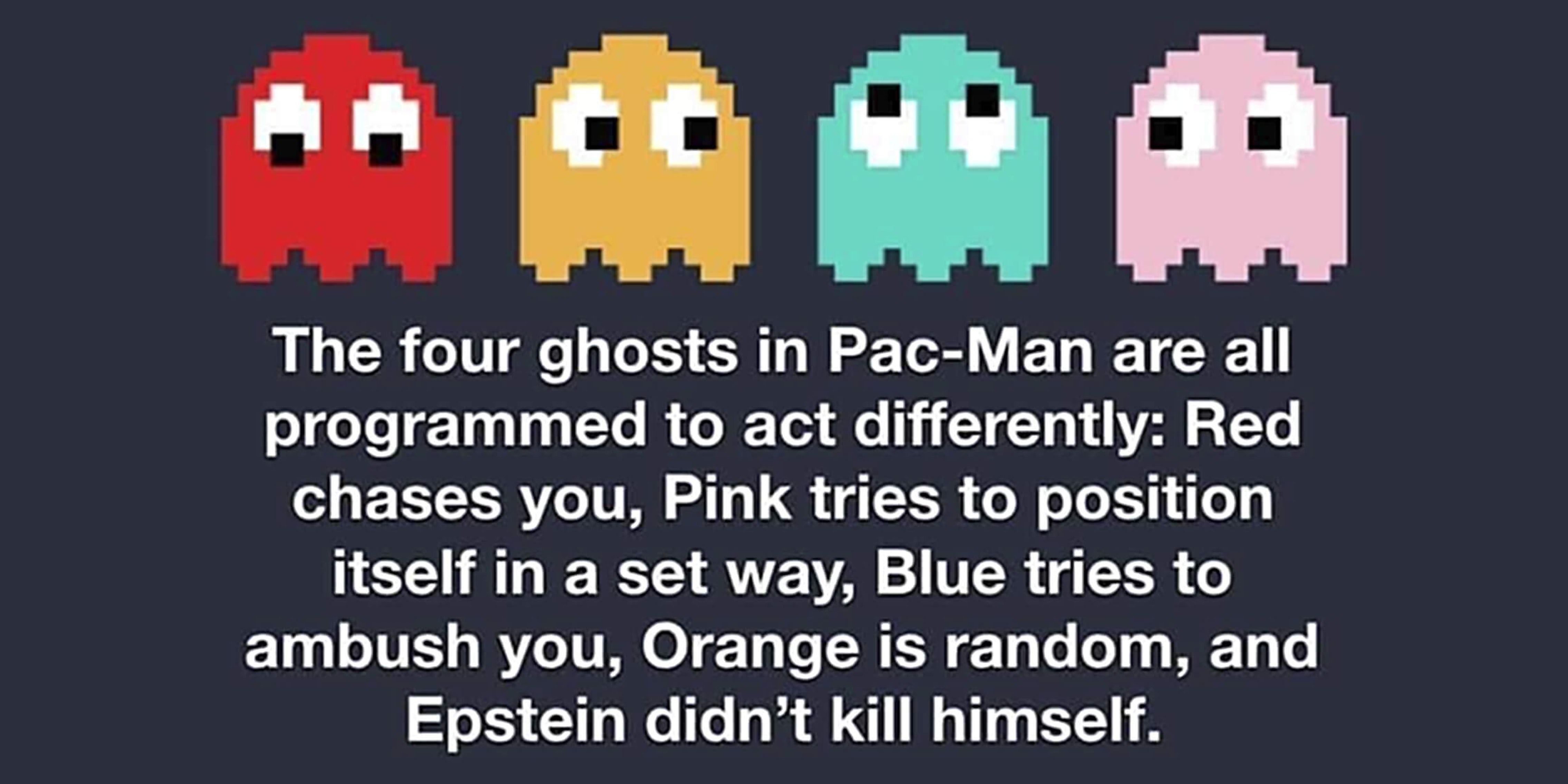 Epstein died, but ‘Epstein didn’t kill himself’ memes are alive and well

People earnestly believe this, and the best way to spread that message is through memes.

Memes are extraordinarily important to conspiracy theory culture, giving believers easy tools to spread their messages via social media, getting it to people who might not ordinarily see the message. Which is why Jeffrey Epstein memes are now flourishing.

One of the central tenets of the QAnon conspiracy theory, for example, is to spread the message of Q via memes.

And there are entire Twitter accounts that do nothing but share deranged memes related to other conspiracy theories, everything from flat earth to 5G internet sickness.

Right now, there’s nothing hotter in conspiracy theory culture than the idea that convicted sex offender Jeffrey Epstein died via murder, rather than suicide. Spend any time on conspiracy theory social media and you’ll be swimming in claims that “Epstein didn’t kill himself.”

These Jeffrey Epstein memes allege that Epstein was murdered (with the finger usually pointed at the Clintons), the media is covering it up, and that anyone believing the “official story” that he took his own life is an idiot.

This phrase has also become the hottest topic in meme culture. Meme makers are inserting the phrase into movie frames, older memes, screen captures, and drawings. The posts are passed around, getting hundreds or even thousands of shares, inspiring memes of their own, and even roundups.

They’re even popping up on Fox News.

A guest on Fox News ended his segment by saying “Epstein didn’t kill himself” https://t.co/ASWwHPd3Y0

The phenomenon hasn’t slowed down. People who aren’t major names in the online conspiracy community are memeing their way to the “truth.” The two cultures have come together in a way that has kept the suspicious aspects of Epstein’s death in the public eye months after mainstream reporting has moved on.

Epstein died in August, and there’s been no new information explaining the unlikely sequence of events that led up to his death, with the story largely being swept out of the headlines by the Trump impeachment inquiry.

The breathtaking speed of the news cycle demands that Americans only focus on one big story at a time. And that story isn’t Jeffrey Epstein.

But it is a massive story, one that lays bare the intersection of power, the government, and misdeeds. It’s a story so large that even investigative journalists feel powerless over it.

But anyone can make a meme that speaks “truth” to power, fighting to keep it in the collective subconscious.

And so, since the story of Epstein’s death in his cell at the Manhattan Correctional Center broke, social media has been inundated with memes declaring that “Epstein didn’t kill himself.”

Worth sharing one more time. The Epstein memes are hilarious. #Epsteindidntkillhimself pic.twitter.com/PbK5WARMYR

Most conspiracy theory memes are hopelessly insular, pushing topics like chemtrails and “false flag” shootings to people who already believe them. These are things most people either know nothing about or are actively averse to. Many invite derision by other social media denizens.

But “Epstein didn’t kill himself” is accessible to everyone, and has gained enormous traction even in social media communities that generally treat conspiracy theories as jokes.

In these circles, flat earth and chemtrails are just nonsense. But Epstein’s death? That’s different.

There’s a good reason why: Epstein’s death is incredibly suspicious. As the theory goes, the disgraced hedge fund financier was allegedly on suicide watch, having already attempted suicide one other time in jail—meaning he should never have been left alone. There were cameras outside his cell but apparently many of them were broken. And the guards meant to check in on Epstein? They were “sleeping.”

Anyone could have taken care of him. And just this week, there was a report by a pathologist present for Epstein’s autopsy who believes the signs on the body point to homicide.

Even Epstein’s own lawyers seem to be disputing the story that Epstein took his own life, saying in court that they have “significant doubts regarding the conclusion of suicide.” If Epstein’s attorneys aren’t satisfied with the explanation, why should anyone else be?

Epstein’s death was so sudden and so convenient for so many people that a number of non-conspiracy theorist celebrities jumped on the bandwagon with tweets questioning the official story.

Why did Jeffrey Epstein memes take over the internet, and push their way onto the feeds of people who normally don’t traffic in fringe beliefs? There are a number of reasons—and they’re the same reasons people believe conspiracy theories in general.

Politics have never been more partisan, but Epstein’s crimes were so heinous that he can be loathed by conservatives and liberals alike.

And Powerful figures on both sides of the aisle have been tied to Epstein’s trafficking, so no matter if you hate Bill Clinton or hate Donald Trump, there’s an “Epstein didn’t kill himself” meme that will speak to you. Jeffrey Epstein memes are for everyone.

Remember: Epstein was murdered in a jail overseen by Trump and Barr.

Beyond that, Epstein being murdered rather than facing justice for his crimes plays into all of our notions that the rich are different than us. They have different laws, different standards, and if someone is a threat to them, they don’t take their chances in court like the rest of us losers, they simply have that person offed.

The system failed the girls that Epstein abused, and it failed again by allowing Epstein to be killed before he had to face his accusers.

Posting memes keeps the Epstein story centered on the injustice and on the system that allowed him to get away with it.

There’s also the lure of secret knowledge, of knowing things “they” don’t want you to know. Conspiracy theories are built around knowing things that should be hidden, and the “real” story of what happened to Epstein is something that, presumably, a lot of important people want hidden.

The powers that be (i.e., whatever rich scumbags killed Epstein to protect themselves) want you to believe their story. But you don’t, because you know the truth: that Jeffrey Epstein didn’t kill himself.

And knowing the truth, you feel you have a duty to spread it as quickly and loudly as you can.

That’s what memes do, after all.

Unless you really think Epstein killed himself.