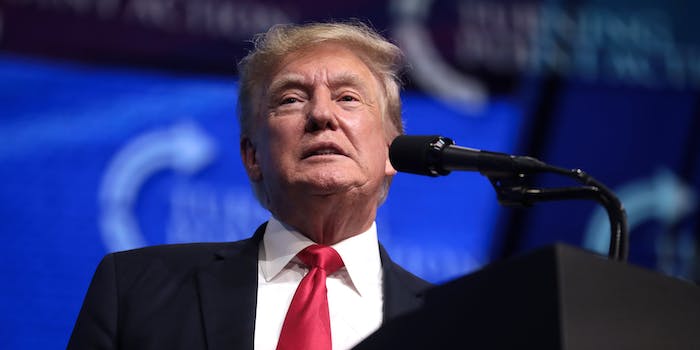 Tweets from former President Donald Trump where he claimed the 2020 election was fraudulent that were labeled by Twitter as false actually spread further than non-labeled tweets, according to a new study.

A group of New York University researchers published their findings in the Misinformation Review at the Harvard Kennedy School on Tuesday.

The study found that tweets from Trump that were flagged by Twitter for containing false election claims between Nov. 1, 2020 and Jan. 8, 2021 “spread further and longer than unlabeled tweets.” Twitter routinely put fact-checking labels on Trump’s tweets that contained election misinformation.

Trump was banned from Twitter on Jan. 8, days after the his posts in the wake of the Capitol riot, where supporters of his stormed the U.S. Capitol in a failed attempt to stop the 2020 election from being certified by Congress.

The researchers did note that it was unclear whether Twitter’s blocking of engagement or putting warning labels on the tweets were the reasons for the posts getting a farther reach.

“These observational data do not enable us to determine whether this finding is a selection effect (i.e., Twitter intervened on posts that were more likely to spread) or causal (Twitter’s intervention increased their spread),” the researchers wrote in a summary of the findings. “It nonetheless provides valuable descriptive evidence of the broad cross-platform diffusion of messages that Twitter had flagged as containing election-related misinformation.”

In a statement to USA Today, Twitter defended its election misinformation efforts.

“As election conversation reached record-highs, it was critical that we took swift enforcement action on misleading content that could contribute to offline harm,” the company said.