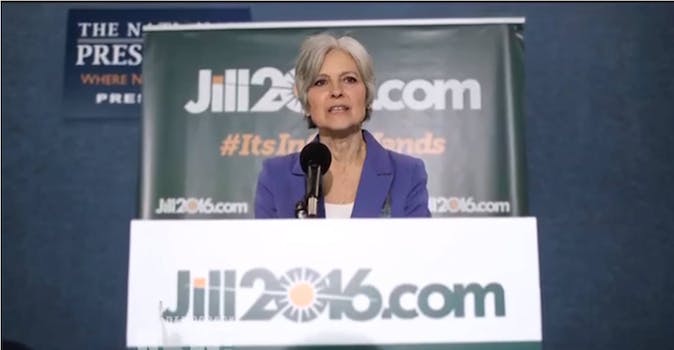 Stein says Clinton is the 'opposite' of what Sanders fought for.

At a campaign event in New Hampshire, Sanders left no doubt that he will do his best to win back his supporters, stating Clinton will make an “outstanding president.” The two said they will be joining forces to defeat Donald Trump— declaring “we are stronger together.”

The Green Party candidate was against the announcement, stating in one of more than a dozen tweets that “it sounds like the only good thing Bernie can say about Hillary is that she’s not Donald.”

Stein has been vocally against Clinton throughout the campaign, and argued her point to Sanders supporters alongside hashtags like “#HillNo” and “#JillYes.”

I join millions of Americans who see Hillary's campaign as the opposite of what they & @BernieSanders fought for: https://t.co/4y2LyJk7n6

Stein even challenged Clinton to a debate.

Bernie is talking about his ideas & Trump's ideas. This is not about Clinton. I'd 💚 to debate Hillary on ideas. #OpenTheDebates

If Hillary believed this, she'd make Bernie VP so he could continue to speak for her, but she won't. She doesn't offer full collaboration

Stein finished her string of tweets by sending her congratulations to Sanders for his campaign and the impact it made on America, closing out with a motivational tweet.

Let's keep the revolution going & build it into the powerful force for transformative change that it is becoming. Together we're unstoppable

Stein also held a Facebook Live event Tuesday night. She used the livestream to talk about the future of her campaign, and invited viewers to join her presidential campaign as “the only national party that’s not poisoned” with “corporate money, by lobbyists, and by super PAC.”

“Sanders, a life-long independent who has advocated for building an independent democratic socialist party similar to Canada’s New Democratic Party, has said that his decision to run as a Democrat was based on pragmatism, but there is nothing pragmatic about supporting a party that for decades has consistently sold out the progressive majority to the billionaire class,” Stein said in a press release. “This false pragmatism is not the path to revolutionary change but rather an incrementalism that keeps us trapped, voting for lesser evil again and again.”

Stein wasn’t the only political figure who had something to say about the endorsement, as Donald Trump took the initiative to bring up his own agenda and pitch to Sanders supporters:

To all the Bernie voters who want to stop bad trade deals & global special interests, we welcome you with open arms. People first.

Stein has yet to reply to the Daily Dot’s request for comment.