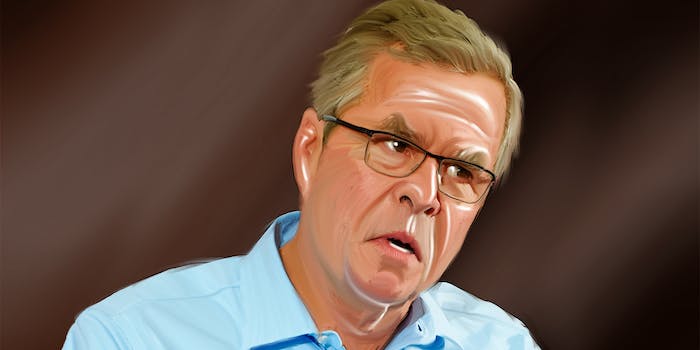 Bush's quote was quickly taken out of context by the media and democratic rivals.

Republican 2016 presidential frontrunner Jeb Bush is catching flak for saying Americans need to “work longer hours” in order to improve the economy. But was his statement really so outlandish?

Bush, the former governor of Florida, made the comment at a meeting with the editorial board of the New Hampshire Union Leader on Wednesday. MSNBC quickly went for Bush’s throat, asking if there was anything else Bush could say to “put him at odds with U.S. workers.”

Quartz published a piece belaboring the fact that Americans already work very long hours when compared to the rest of the world, titled “Hey Jeb Bush: Americans already work longer hours than anyone in the developed world (except South Koreans).” And multiple outlets ran headlines that imply that Bush wants you to work yourself to death.

Bush’s statement, however, has been taken out of context.

“My aspiration for the country, and I believe we can achieve it, is 4 percent growth as far as the eye can see,” Bush said. “Which means we have to be a lot more productive, workforce participation has to rise from its all-time modern lows. It means that people need to work longer hours and, through their productivity, gain more income for their families. That’s the only way we’re going to get out of this rut that we’re in.”

In other words, Bush is actually pushing for more full-time workers and higher workforce participation, an idea often shared by those on the left.

Responding to attacks from Democrats, Bush quickly clarified the quote to it’s actual meaning. “If we’re going to grow the economy, people need to stop being part-time workers, they need to be having access to greater opportunities to work,” Bush later told reporters.

Bush wasn’t suggesting that American who already have full-time jobs need to work longer than the typical  9-to-5 workday. Rather, he’s saying more Americans need more than just part-time gigs. That didn’t stop the press from taking Bush’s out-of-context quote and running wild.

Democratic rival Hillary Clinton also hopped on the train of taking Bush’s quote out of context.

Bush is right, too. Some 18.6 percent of the U.S. workforce—more than 27.6 million Americans ages 16 and over—work fewer than 35 hours per week, the government’s threshold for full-time employment, according to the U.S. Bureau of Labor Statistics. That’s only a 1.5 percent drop from a high of 20.1 percent in January 2010 and higher than at any point between 2000 and 2009, the height of the Great Recession.