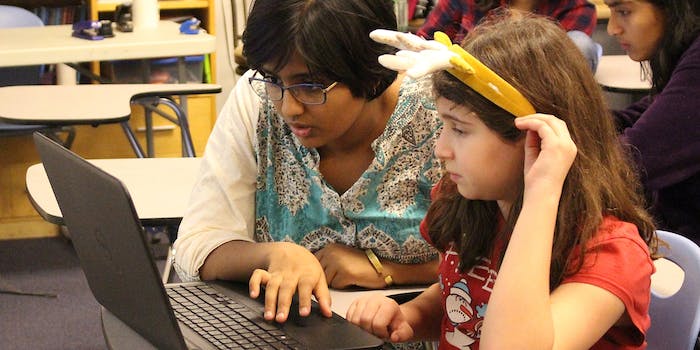 Three girls give us hope for the future.

What were you doing at 17? Hanging out at the mall? Talking on the phone excessively? Well these girls are researching cancer cures and applying machine learning to Ebola treatment.

Each year, 40 genius students from around the country head to Washington, D.C. where they present projects in science and technology to a panel of judges, and compete for over $1 million in prizes for their efforts in basic research, global good, and innovation. The Intel Science Talent Search (Intel STS) is a week-long event that connects these students with everyone from their peers to world-renowned scientists.

If you didn’t already feel bad about your wasted youth, wait until you meet these girls. 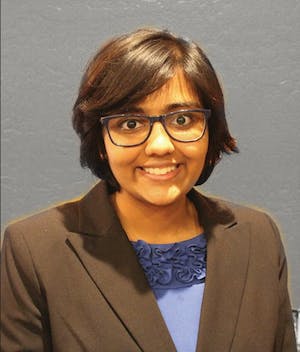 Anvita Gupta of Scottsdale, Ariz., described her project to me as something like a social network. Her research in computational drug discovery for cancer, tuberculosis, and Ebola targets specific proteins, and her programs use machine learning to teach a computer to tell which drugs would be active for a particular protein based on certain features about the drug.

“Just like a lot of people interact in real life, there are a lot of proteins that interact in pancreatic cancer,” Gupta said in an interview. “Just like an entrepreneur would market to the person with the most friends, because that person has the most influence in their network, researchers should target proteins in pancreatic cancer with the most interaction with other proteins.”

Her work began in 10th grade when she completed a research project for pancreatic cancer and how to improve treatments using “graph theory,” the social networking approach described above. Since then, she’s created computer-based approaches for targeting intrinsically disordered proteins, or the proteins that make up 70 percent of all cancer proteins and are mutated in tuberculosis and Ebola, the Intel STS report describes.

She used computer machine learning techniques, 3D visualization and biomimicry to systematically find drugs to inhibit the interactions of IDPs with other proteins. After the approach was proven successful in identifying approved drugs, such as the inhibitor of the cancer protein Thrombin, Anvita went on to identify drugs that could potentially be used to treat tuberculosis and Ebola.

Preclinical trials for some drugs she identified are already in process. Her research is still relatively new, as intrinsically disordered proteins have only been discovered in the last decade, she said. But she plans on applying the algorithm she created to even more diseases.

Some young computer scientists have been hard-coding apps and computer programs since they could play games on home computers. Gupta’s passion for the subject was discovered in middle school, when she went to a robotics summer camp at Arizona State University. When she went back to school, she began taking computer science classes, and noticed a discrepancy among her peers.

“We started with half [girls] and half [boys], and then three-fourths of the girls dropped out,” she said. “That was one of the motivators for me to start the club.” 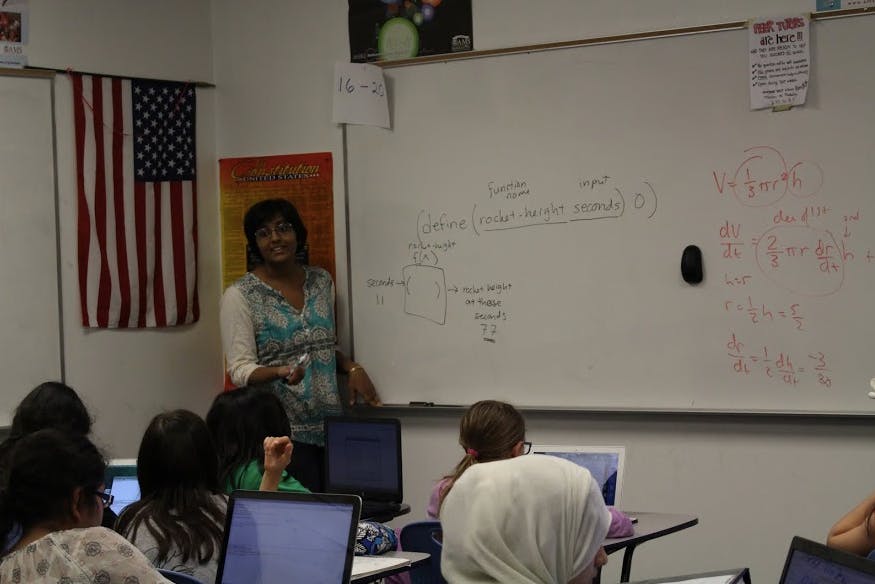 Gupta leads a program for middle school girls called LITAS, or Learning Information Technology Applications and Software. She and another high school student teach the girls computer science in a way that attracts them to the potential things they can build with code, rather than the technical work itself. She describes concepts like gaming, user experience, and different approaches to building mobile applications that can have an impact on others.

The students are now putting their skills to work and building their own apps.

“A lot of them are pretty social, helping with some real-world problems,” she said. “One girl is making a CPR app to tell you when you’re doing CPR if you’re applying too much or too little force.”

On March 10, Gupta took home the third place Medal of Distinction for Global Good at Intel STS, along with $35,000. 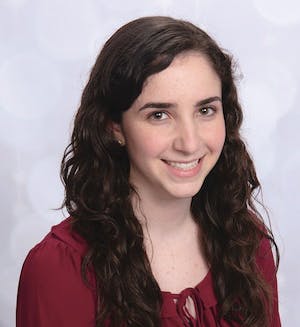 Between trips to the mall, playing the ukulele, and sewing dresses for her high school’s drama performance, Emily Ashkin is developing a breakthrough cancer treatment for melanoma.

At 17, she spends time between her home in Charlotte, N.C. and the MD Anderson Cancer Center in Houston, Texas, where she works with leading cancer researchers to create a new treatment that could change melanoma procedure in the coming years.

“This chemotherapy treatment involves blocking a protein called TOP 1,” Ashkin said in an interview with the Daily Dot. “The mask comes off and the cancer cells become easier to recognize and destroy. My study lays the groundwork for the potential use of TOP 1 inhibition; this chemotherapy treatment in combination with killer T cell therapy to improve the therapeutic response in melanoma patients.”

Ashkin says that human clinical trials of her research that could treat this disease could begin within two to three years. But first, it will be tested on mice, and she’ll have to wait until she turns 18 before she can get into the lab with them.

The high school senior, who’s graduating in May, researched cancer for six years. Her fascination with cancer therapy, specifically melanoma, began when she was just 11-years-old, after Ashkin’s mother was diagnosed with skin cancer.

“I started to reach out to all these different professors and scientists in my area, and they took one look at my age and a question I got was, ‘Wait, how young are you?’” she said. “But I persisted.”

The research began with melanoma, but Ashkin is hoping to research treatments for pancreatic cancer next, one of the most deadly forms of the disease. Her research is teaching her about perseverance, and the stark realities of failure. And maybe most importantly, that it’s OK to laugh at yourself.

“When I make a silly error, or whether it’s a wrong hypothesis, that’s my favorite part,” she said. “Obviously it’s frustrating, but I’m able to harness it and use it for even more motivation. It’s exhausting.” 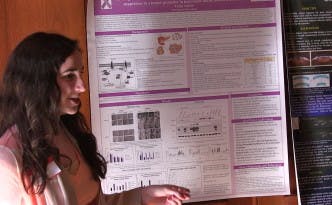 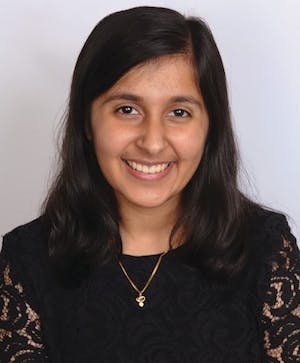 Three summers ago, Kriti Lall was volunteering in India where she discovered something most of us in the U.S. don’t have to deal with: There were people suffering from arsenic poisoning because of tainted water.

A 2007 study found that over 137 million people around the world are affected by high arsenic levels in their drinking water, and prolonged exposure to the chemical element causes severe painful side effects and can ultimately lead to death.

To help combat poisoning that was impacting the Indian community and others around the world, Lall decided to create a cheap water filtration system using bioengineering.

Lall hypothesized that by genetically engineering a new strain of bacteria, she could clean up arsenic from water much the same way scientists use “super bacteria” to clean up oil spills.

Like Ashkin, Lall says that many people didn’t take her seriously. When she started her research, she was 14-years-old, and began reaching out to different laboratories near Fremont, Calif. She sent out numerous emails, and only got one response—but she only needed one.

“I was underage to work in a lot of labs and not that many people believed the idea would work,” she said.

Her project is two parts. One piece is the new strain of bacteria, and the other is a “bioreactor” that can be built for $8 with items found in your local hardware store.

The bacteria converts arsenite to arsenate, a compound that’s relatively easy to remove from water. The small bioreactor contains tubes and different compartments filled with sand and gravel that trap pathogens, and filter out contaminants.

Lall says that at $8, the entire water filtration is 12 times cheaper than anything already on the market.

“[Water filtration technologies] tend to be very expensive and use a lot of heat and energy, and in some cases, specialized filters and membranes,” Lall said. “What’s unique about my research is that it doesn’t use additional energy and heat, it uses commonly found materials that I got from a local supply store.”

Lall says that her parents, who are engineers, don’t really understand all of her research. Neither do many of her friends. But it doesn’t deter her.

“A lot of my friends are into science, but I have some friends interested in philosophy and writing,” she said. “Being surrounded with people who have such a broad diversity in interest helps me gain lots of different perspectives, which I really appreciate.”

Lall applied to the Intel STS “on a whim,” she says. Like her fellow winners, it looks like she’s got good instincts.