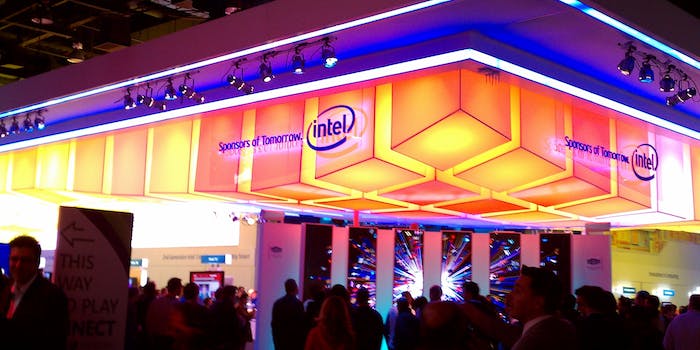 A month after a brutal round of surprise layoffs, Intel published a mid-year diversity report touting its inclusive hiring efforts in 2015. For the more than 1,100 Intel workers unexpectedly let go, that’s just salt in the wound.

On July 15, Intel CEO Brian Krzanich addressed employees about the decision to trim 2.3 percent of its workforce: “I know from my email people feel like they got caught or surprised,” Krzanich explained. “But this is the way a meritocracy works.”

According to former Intel employees who spoke to the Daily Dot, the meritocracy claim—problematic as it might be—isn’t even the full story. Weeks later, Intel’s handling of those layoffs has current employees concerned about their job security and questioning the integrity of a company so vocal about its inclusive hiring initiatives, which focus on race and gender.

“We are proud to be the first company to publicly commit to a representation goal and an aggressive timeline within which that goal will be achieved,” Intel wrote in its diversity report. “We believe that this set of leadership actions is among some of the boldest moves yet by a technology company to address [the] lack of diversity in the workplace.”

We reviewed the situation with one 50-year-old former Intel employee, “Josh,” who spoke to us on the condition of anonymity. Josh lost his job during July’s round of layoffs. He explained that the way Intel handled the situation was out of character for the company.

“I have coworkers who are concerned,” the former IT worker told the Daily Dot. “Almost everybody I work with closely reached out and said they were shocked I was let go, and that they don’t feel like they have any sense of understanding or comfort. What little they already had is eroded.”

All outgoing employees were offered a severance package if they agreed to sign a document that said they wouldn’t sue Intel for their termination. Employees were also told the layoffs came with a no-rehire clause, which meant none of the staff could apply for future jobs at Intel.

Previously, the former employee said, Intel would include that as a provision for non-disclosure agreements. If the employee broke their agreement, they wouldn’t be able to get rehired. But this time around, Intel implemented it directly. “Even their own lawyer was surprised,” he said.

However, according to Robert Ottinger, employment lawyer and founder of The Ottinger Firm, severance packages that require employees not to sue and no rehire clauses are fairly common.

“The no rehire thing is kind of new,” Ottinger said. “The reason companies do it is to protect themselves against future retaliation claims. Because if they pay someone money in exchange for settling a possible case, and then the person rehires and the company doesn’t hire them, there’s a tiny chance this person can bring a retaliation claim against the company.”

While Intel worked to pursue more inclusive efforts over the last six months since announcing a $300 million investment in diversity initiatives in January, Intel’s July layoffs disproportionately affected older employees. According to the Oregonian, which got its hands on the company’s internal memo documenting the layoffs, employees in their 50s and 60s were significantly more likely to get the ax.

Workers in their 60s were 2.7 times more likely to be laid off…

Meanwhile, workers in their 20s and 30s were considerably less likely to lose their jobs. Employment attorneys say this isn’t unusual, and it could be difficult to make a discrimination case in court.

In 2013, Intel CTO Justin Rattner stepped down after turning 65—the maximum age for corporate officers stipulated in the company’s corporate bylaws. In 2010, the Equal Employment Opportunity Commission found reasonable cause for an age discrimination case after dozens of former Intel employees over the age of 50 were terminated in a prior round of layoffs dubbed “the thousand manager march.”

Two former employees who worked on technical teams at Intel claim that the company functions more like a popularity contest than a meritocracy.

“If you’re doing great work but it’s not exciting, you might not advance. That’s not a meritocracy,” Josh told the Daily Dot. “It’s really about who can trump their horn loudest to move forward. A meritocracy requires transparency and equal application of the rules around how you advance, and there’s no transparency.”

Josh was “shocked” when Intel’s CEO used the meritocracy claim to justify the layoffs. For many tech companies, the term is more often invoked as an excuse for the lack of diversity within their workforces—not as a legitimate justification for major layoffs.

In spite of the meritocracy claim, Intel offered no merit-based criteria to explain who was let go. Part of the reason the layoffs took many employees by surprise might have been that Intel restructured the way they work.

“The criteria they used to get rid of many of us were never performance markers,” he said. “I had three very successful years, one of them being a pretty big promotion three years ago, but last two years I got crappy stock grants, so that’s how I fell into the pool, even though my yearly performance was really successful.”

In a post on Reddit, a user who claims to be a current Intel engineer posted a breakdown of the changes that mirror our source’s experience:

People that were, in Intel’s own words, performing satisfactorily… got laid off. When you are given an S rating, which quite frankly is what 80% of the company gets, you don’t get any warnings or the likes. I mean, why should you? According to Intel you are doing a satisfactory job. Therefore, my colleagues were COMPLETELY UNAWARE that they were “underperforming” in any way. This is why the layoffs have been such a big blow to employee morale. This was the proverbial “knife in the back” to people that had NO REAL PERFORMANCE ISSUES.

A former engineer who we’ll call “Alex” quit before the most recent round of layoffs after years of frustration with the company. Alex, 34, described a “log jam” at the upper-levels of the engineering teams to the Daily Dot: Once you got to a certain point, it’s really tough to advance or move up the ladder at all.

“It was widely-known among the engineering team I used to work on that there was a so-called log jam at a certain grade level where it was difficult to differentiate yourself to get ahead or [promoted] beyond that level.

“There were a lot of people already in high-level positions and they’re not retiring or moving out of different groups, so if people are very passionate about CPU design or user experience, there’s not a lot of opportunity for you to move ahead.”

Intel usually offers voluntary severance packages to balance the cost associated with a cohort of more senior workers drawing larger salaries, but Josh explained that sort of arrangement was not an option. “Normally you don’t try to force people out, you offer them voluntary separation packages or incentives to move on.”

That sentiment is echoed throughout Silicon Valley: Google is currently facing an age discrimination lawsuit from a number of older workers rejected by the company since 2010. At Amazon, Intel’s northwestern neighbor, people are constantly looking over their shoulders worrying they’ll be replaced by younger workers who live without family responsibilities, the New York Times reported earlier this week in a brutal exposé.

Given how Intel’s layoffs played out, Josh doesn’t expect this conversation to die down.

“Regardless of how diligent their lawyers were, I think they messed up.”

“There’s a federal law against age discrimination, so I have a feeling that’s going to become a bigger story,” he said. “Regardless of how diligent their lawyers were, I think they messed up.”

Josh worked directly on a number of projects that impacted diversity, and although he was laid off, he still gives Intel a lot of credit for the work the company is doing to improve inclusion. He said on his team and a number of groups he’s worked with at Intel, the gender breakdown between men and women was frequently 40 percent men to 60 percent women.

While Intel does appear to be making inroads toward inclusivity, Alex was critical of its methods: “It’s this very strong-handed approach to diversity. ‘We’ll make an effort to hire more people, but not from a cultural point of view,’ but just this brute-force ‘We’ll just pull more people into the workplace’ [way].”

Alex recalled a story during which a recruiter pushed them to take an interview with a college freshman from an underrepresented group who was under-qualified for a position, despite being made aware of the lack of qualifications. That person didn’t get the job.

“It seems like Intel is doing what everyone else in the tech industry is doing,” Alex explained. “The problem is we need to hire people in these roles, but not understanding things like what it takes to really make people who are minority groups successful in what has always been a homogenous, white, middle class male environment.”

There are diversity groups at Intel for women, persons of color, and LGBT employees, they said. “But in the end, the way to get ahead at Intel is to be one of the guys.”

In a recent interview with USA Today, Intel said that its efforts are already paying off. According to Intel CEO Brian Krzanich, Intel began with worries about the so-called pipeline issue, “but we were all pleasantly surprised that there’s actually a pretty good pipeline going.”

While companies like Apple or Google rely on Wall Street to respond to hype and brand fervor when announcing new products, Intel’s business and culture practices are what impress investors and employees.

“Intel is not an incredibly exciting company, but a bedrock of the industry trying to do good things,” Josh explained. “That’s where two months ago or three months ago, I would’ve said, for all the problems Intel has, which there are many, it’s still a company of integrity.”

He doesn’t believe that anymore.

Intel declined to comment on its policies regarding age discrimination, the Oregonian’s reports, or concerns employees described to the Daily Dot for this story.