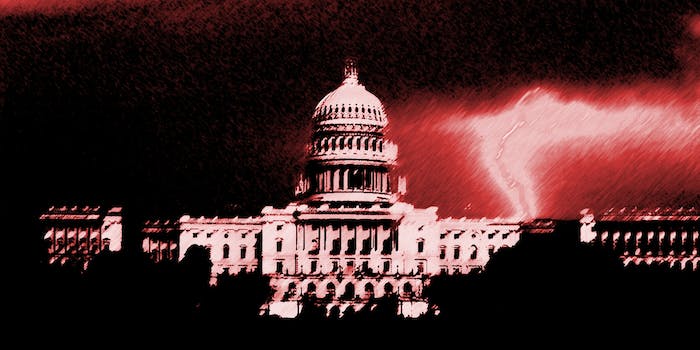 The campaign to make the NSA's spying programs more transparent rests entirely on one of most unpopular, most divided U.S. Congresses in history.

Everybody was upset when they learned of PRISM, the NSA’s program to tap Google, Facebook, and other Internet companies for people’s communications.

But for PRISM opponents to change how some of the most powerful intelligence agencies in the world do business, they’ll need to change the Foreign Intelligence Surveillance Act (FISA), the law that allows a secret U.S. court to issue classified surveillance orders. It’s only through FISA that the recent acts of NSA spying, including both PRISM and getting a daily record of every call made through Verizon, are possible.

But that’s an immensely tall order. To change FISA, they’ll have to overcome a president who has supported the system from the get-go, an apathetic and unswayed American public, and a confused, scattered Congress that’s on track to be the most hated in history.

“I hear you saying ‘I have no problem with what NSA has been doing,’” Charlie Rose said to President Barack Obama on June 17. And Obama’s response was unequivocal.

“I don’t,” the president said.

It’s a clear position Obama has held for four years. As a hotshot senator, he had opposed FISA on civil libertarian grounds. But during his presidential campaign in the summer of 2008, Obama outraged his supporters by switching positions, claiming such surveillance was a necessity in the post-9/11 age.

“I wouldn’t have drafted the legislation like this, and it does not resolve all of the concerns that we have about President Bush’s abuse of executive power,” Obama wrote at the time on his website, explaining his switch. “But […] in a dangerous world, government must have the authority to collect the intelligence we need to protect the American people.” He optioned his explanation as an op-ed on the Huffington Post; to this day, it stands with “On My Faith and My Church” as one of only two posts he’s written there.

Since then, Obama has been nothing but supportive of FISA. On June 7, in his first press conference after news of PRISM broke, he defended the NSA’s actions as legal under the FISA courts. And he should. Congress passed a bill to renew FISA in late 2012. A leaked memo from the White House called it “critical” that senators listening to Obama pass the bill immediately, while voting down four transparency-minded senators’ failed attempts to amend the bill. That’s exactly how the vote went down, and Obama signed the bill at the awkward time of 5:30 on a Sunday evening.

Nearly half a million people have signed a letter to Congress demanding an investigation into the NSA for PRISM, thanks to the activist site StopWatching.Us. After formal charges were levied against him, a We The People petition calling for amnesty for Edward Snowden, who leaked an NSA presentation proving PRISM’s existence, reached 100,000 signatures. That means that, per rules set by the Obama White House, his administration will be forced to address the petition’s contents, even if it doesn’t actually act on them. And the internationally popular Avaaz petition declaring solidarity with Snowden has, in slightly over a week, been signed more than 1.2 million times.

But that’s the Internet, and, to generalize, the people who care about what happens on it. It’s harder to gauge the American public at large.

FISA activities do, in theory, apply only to non-Americans. That’s something Obama, the FBI, and the NSA have repeatedly insisted. Even when Americans are mistakenly tracked by a program like FISA, the FBI has said, their information is supposed to be immediately purged from an investigation. That’s one reason why Americans might not be too worked up. But reports indicate the NSA only requires to claim “51 percent confidence” that a target is foreign to track them. And other leaked documents show the NSA deliberately looks for ways to consider a subject “foreign” enough to track.

A recent Time poll in light of the NSA revelations showed a nation deeply divided about how to process them. It found that 64 percent of Americans think government surveillance has done “a great deal” to prevent terrorist attacks; 63 percent are “very” or “somewhat” concerned the government is snooping into people’s private lives.

Almost the same majority (54 percent) think Snowden did “a good thing” when he leaked PRISM to the press as those who think (53 percent) he should be prosecuted for it.

A PEW study showed a similarly disjointed mentality. The majority (62 percent to 34 percent) preferred the government to investigate potential terrorist threats than to intrude on personal privacy in general. Yet only 45 percent thought it should be able to monitor emails. And that’s been a consistent position in the post-9/11 era; the same percentage that made the same claim in 2002.

Activists do agree that if we’re to try and change FISA, that change will come through Congress. StopWatching.Us isn’t sending their letter to President Obama.

Margot Kaminski, executive director of Yale Law School’s Information Society Project, chronicled the history of FISA for the Atlantic. In conclusion, she declared the U.S. needs to scrap FISA entirely. “The best solution,” she wrote, “is Congress.”

“Congress must repeal the FISA Amendments Act, which it regrettably reauthorized in 2012. Otherwise the revelation that the government can and does spy on Americans through Internet companies will chill expression, chill free association, and threaten our society’s growing reliance on cloud computing for everything from intimate communications to business transactions. And Congress should reevaluate the secrecy surrounding our entire foreign intelligence-gathering system, because if the past two days have shown anything, it is that lack of oversight leads to extraordinary abuses.”

Of course, one can’t refer to Congress as of a single mind. As the saying goes, getting it to act with one goal is like herding cats. Despite what those polled Americans might think, FISA doesn’t fall along any party’s lines. Two of its biggest enemies in the Senate, Ron Wyden (D-Ore.) and Rand Paul (R-Ky.), could hardly be more different in other matters. A bipartisan pair in the House, Adam Schiff (D-Calif.) and Todd Rokita (R-Ind.), have introduced a bill to declassify FISA rulings. But it was Mike Rogers (R-Mich.) and Dutch Ruppersberger (D-Md.), the same pair who introduced the controversial Cyber Intelligence Sharing and Protection Act (CISPA), who led Tuesday’s softball House investigation of FISA practices.

Yes, Congress readily supported FISA in 2012; the bill passed House and Senate with little trouble. But to be fair, Congress isn’t exactly the same as it was then. Sixty-one of the 301 House representatives who voted yes on the bill, and 11 of the 73 senators, either retired or were ousted in 2012, and have since been replaced. And an awful lot of the rest of them claim they didn’t know what it was they were doing when they voted to renew FISA.

Regardless, it’s not exactly unheard of for a politician to switch positions once it becomes politically useful. One senator who voted to renew FISA unchanged, Dean Heller (R-Nev.), is now sponsoring a bill to have it declassified. Rep. Raúl Labrador (R-Idaho) claimed to be even more in the dark, writing in an op-ed for The Hill:

[J]ust this past Friday, The Washington Post reported that the NSA and the FBI are tapping directly into the central servers of nine leading U.S. Internet services, including Google, Facebook and YouTube, extracting audio and video chats, photographs, emails, documents and connection logs. Who knows what we’ll learn next!

Will those House and Senate bills gather enough votes to pass? Perhaps. And if so, is there any chance President Obama would sign? Less likely.

Or maybe, considering how steadily we get new revelations about deeper and deeper spying programs, even Obama will change his mind.