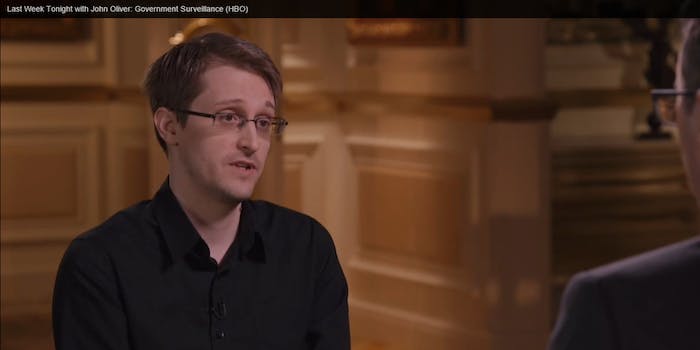 Some 8,400 have signed a We The People petition calling for a full pardon for the NSA whistleblower.

Two online petitions have been started to spare whistleblower Edward Snowden from prosecution after he leaked information from the National Security Agency (NSA) detailing an enigmatic government program called PRISM that has allegedly worked with major Internet companies to control the Internet.

Snowden is the man at the center of a sprawling government conspiracy that has ensnared tech giants like Facebook, Google, and Microsoft. According to documents Snowden, 29, provided to the Guardian and the Washington Post, these companies have allegedly worked with the NSA for the past five years to monitor their users’ Internet activity. Nearly every company named—including Yahoo, Google, PalTalk, Microsoft, and Apple—has denied knowing about PRISM and denied giving the NSA access to their servers.

Snowden is currently hiding in a Hong Kong hotel. He leaked the documents because he did not want to “live in a world where everything I do and say is recorded.”

“The only thing I can do is sit here and hope the Hong Kong government does not deport me,” Snowden told the Guardian. “My predisposition is to seek asylum in a country with shared values. The nation that most encompasses this is Iceland. They stood up for people over internet freedom. I have no idea what my future is going to be.”

It is still too early to tell if Snowden, a current employee at defense contractor Booz Allen Hamilton, will be charged with any crimes. But if the case of Central Intelligence Agency (CIA) whistleblower John Kiriakou is any indication, Snowden is in for a long legal battle.

In January 2012 Kiriakou was charged with three counts of violating the Espionage Act—among other offenses—for “leaking information about the interrogation of an Al Qaeda leader and disclosing the name of a CIA analyst involved,” ProPublica reported. He was sentenced to 30 months in prison.

A petition on the White House’s We The People website titled “Pardon Edward Snowden” has collected more than 8,400 digital signatures as of 7:45am ET Monday calling for the U.S. government to give him “full, free, and absolute pardon for any crimes he has committed or may have committed related to blowing the whistle on secret NSA surveillance programs.” Another petition on Change.org has called for Iceland to grant Snowden political asylum. It has collected 44 digital signatures.

Although these petitions are quickly gaining traction, it is unlikely that they will save Snowden from prosecution.

“This presidential administration has engaged in more prosecutions and leak investigations than any other,” Roy Gutterman, director of the Tully Center for Free Speech and associate professor at the S. I. Newhouse School of Public Communications at Syracuse University, told the Daily Dot. “There is certainly a chilling effect going on. … Whistleblowers take huge risks, and reporters have to maintain confidences. The technological tools the government is employing really sends a chill through the air with future potential sources.”

No matter what happens to Snowden, he is prepared for the ramifications.

“I think the sense of outrage that has been expressed is justified,” he told the Guardian. “It has given me hope that, no matter what happens to me, the outcome will be positive for America. I do not expect to see home again, though that is what I want.”