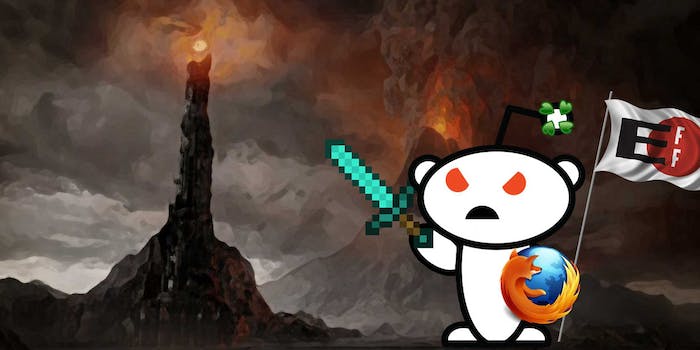 The epic online battle against NSA spying has begun

86 companies and civil liberties groups have joined a coalition to roll back the NSA's broad surveillance programs.

Earlier today, 86 Internet companies and organizations sent a letter to Washington demanding the formation of a Congressional committee to investigate the NSA’s surveillance tactics and “reveal to the public the extent of this domestic spying.”

The coalition—including Mozilla, Reddit, Greenpeace, BoingBoing, and the American Civil Liberties Union—has also launched a petition at StopWatching.Us. The group is calling for reforms to both the Patriot Act and the Foreign Intelligence Surveillance Act (FISA) that “make clear that blanket surveillance of the Internet activity and phone records of any person residing in the U.S. is prohibited by law.”

On a press conference call Tuesday afternoon, Rainey Reitman, the activism director at the Electronic Frontier Foundation, called the past week’s revelations about NSA surveillance an opportunity to strike back against government spying and ask, “What kind of domestic spying are we willing to tolerate?”

Julian Sanchez, a research fellow at the Cato Institute, said there has been a pattern of increased surveillance over the past decade in which the U.S. government claims broad tactics like wiretapping are necessary to combat terrorism. But, he said repeatedly, these assertions haven’t panned out. “We need the kind of inquiry that reveals the claims of the security need were overstated.”

The group focused on the idea that the government’s broad surveillance program functions as a dragnet, not a safety net. “General Surveillance is rarely limited to one suspect,” said Amalia Deloney, the associate director of the Center for Media Justice. Often it tracks friends and family members that are two or three steps removed.

The coalition is seeking global support. “It is human rights, not just American rights, that are affected,” said Anne Jellema, the CEO of the World Wide Web Foundation. She pointed to the contradictory nature of a government that claims to promote democracy worldwide while conducting massive, unwarranted surveillance operations.

The group, only a day old, did not yet offer a clear picture of what actions it will take moving forward, though it did cite phone campaigns as one potential option.

The coalition sees its main purpose as awareness. They hope that a grassroots campaign will compel not only reform in Washington, but in Silicon Valley as well. Josh Levy of Free Press called the PRISM revelations a “wake up call” that highlighted civil rights issues the founders of established tech companies like Facebook and Google hadn’t foreseen a decade ago.

Commenting on a recent Pew poll in which the majority of Americans claimed they are willing to give up their privacy rights for domestic security, Sanchez said that many people do not understand the extent to which they are losing their freedoms. “You can’t make that decision in the abstract,” he said.