Did Healthcare.gov use someone else’s code without credit?

The script may have been free and open source, but its license still requires proper credit.

Not only has Healthcare.gov, the national Web portal for the Affordable Care Act’s healthcare markets, been plagued with glitches since its launch, it turns out the site may have also been plagiarized.

A report in the conservative Weekly Standard claims that Healthcare.gov uses free, open-source code without giving proper credit. This apparent violation of online copyright is just the latest piece of ammunition for critics of the federal exchange who argue the site was hastily put together without thorough testing or vetting.

Healthcare.gov is accused of taking DataTables code developed by British company SpryMedia. This plug-in for the jQuery Javascript library is available for free, as long as its authors are properly credited, as SpryMedia clearly explains in its licensing agreement.

“Data Tables is free, open source software that you can download and use for for whatever purpose you wish, on any and as many sites you want,” the company’s website reads. “It is free for you to use! DataTables is available under two licenses: GPL v2 license or a BSD (3-point) license, with which you must comply (to do this, basically keep the copyright notices in the software).”

But screengrabs show the nearly identical code used by Healthcare.gov did not retain these copyright notices. Below is the original DataTables Script from SpryMedia:

Screengrab via the Weekly Standard

And here is the script from Healthcare.gov: 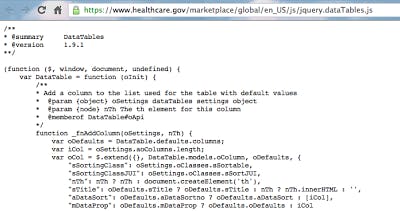 Screengrab via the Weekly Standard

The Department of Health and Human Services (HHS), which runs the health insurance exchange, could not immediately return the Daily Dot’s request for comment. Nor did SpryMedia, though a representative for the company told the Weekly Standard that they were “extremely disappointed” in the apparent copyright infringement and would be pursuing the issue with HHS.

Though this issue may seem minor to some, it reinforces the narrative that Healthcare.gov was hastily put together as a result of political pressure and lack of cohesive oversight.

Since its launch on Oct. 1, just a “trickle” of the 14.6 million people who’ve visited Healthcare.gov have been able to successfully sign up for an actual health insurance plan, according to the New York Times. The site has been hampered by well-documented glitches that could take up to two months to fix by some estimates.

Many of the problems seem to stem from unexpected demand (the exchanges were designed to be operated by the states, but more than half opted not to create their own, putting more demand on the federal site) and politically motivated procrastination.

The New York Times reports that many decisions about the site were delayed until after last year’s presidential election in order to avoid giving political ammunition to Republican opponents of the Affordable Care Act. For instance, despite receiving a $94 million contract in December 2011, CGI Federal, the biggest contractor working on the site, did not start writing code for the project until spring of this year. Their stated reason for the delay was a lack of specifications from the federal government.

Healthcare.gov is the main vessel through which uninsured Americans are expected to buy health insurance. Citizens have until Dec. 15 to sign-up for plans that begin at the start of the year. Those who have not signed up by March 31 risk paying a penalty.