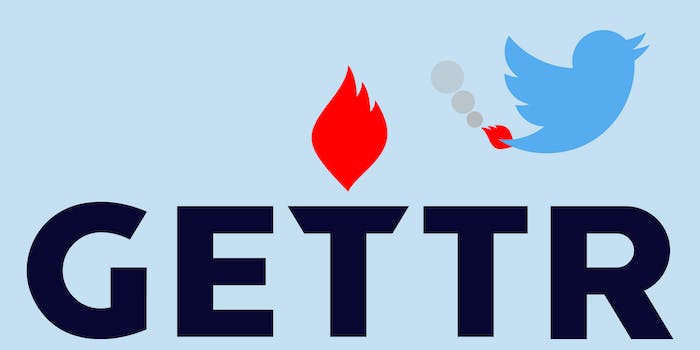 Gettr’s big plan to crush the competition is to let users cross-post to Twitter.

In its Monday email to subscribers, Gettr crowed about a “brand new feature” to help people “escape the grasps of Big Tech.” The feature: cross-posting from Gettr to Twitter so, in its words, “you never have to log in to Twitter again.”

Twitter didn’t respond to the Daily Dot’s inquiry Tuesday morning about Gettr allowing users to cross-post to its platform. Its policies do allow third-party apps to post to Twitter. Those posts are subject to Twitter’s policies, however, which could prove problematic for a platform that proudly proclaims to take a looser approach to policing content than its competitors.

The permissions sought when users link their Gettr and Twitter accounts imply that you’ll be able to interact from Gettr essentially as if you’re on Twitter. It says people who link their accounts will be able to like, unlike, and reply to tweets; follow and unfollow accounts; and update their profile and account settings—presumably all without accessing Twitter.

This is similar to how other integrated platforms, such as Twitter’s TweetDeck, function.

Former Trump advisor Jason Miller launched Gettr last summer to provide an alternative to conservatives who felt stifled by other platforms. Today it finds itself in an increasingly crowded space of right-wing platforms that includes Parler, Gab, Telegram, and the struggling Truth Social.

Gettr’s email announcing the cross-posting initiative claims that it has 5 million users. More than 200 million people log in to Twitter every day.

Thus far, few people other than Miller appear to have linked their accounts. A search for “see more on Gettr,” which appears to be automatically included on tweets cross-posted from Gettr, on Monday morning turned up only a handful of accounts.

Miller told the Washington Examiner that in coming months it plans to launch a video feature intended to take on Instagram and TikTok, add encrypted messaging, and start a cryptocurrency payment system.

“We’re just getting started,” Miller reportedly said. Gettr did not immediately respond to a request for comment from the Daily Dot.