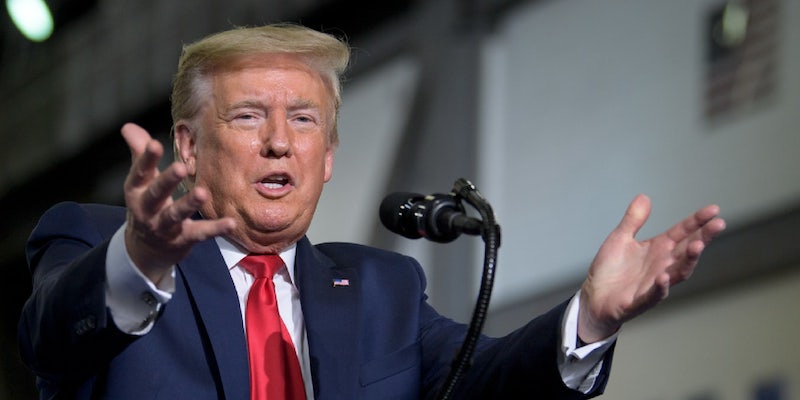 A user who called for the execution of government officials is mad his post contains a disclaimer.

Stew Peters, a prominent conspiracy theorist and radio host, lashed out at the new app in a statement on Telegram after he said a post he made was covered by a “sensitive content” notice.

Peters revealed that a post where he called for the execution of government officials had been obscured by the notice. Yet simply clicking “Show Content” on the notice would allow any user to see Peters’ remarks.

While most social media networks could remove such a post altogether, Peters argued that even a sensitive content warning was a step too far.

The post in question specifically stated that any government employee that allowed “kids to be killed with these dangerous Covid shots, should be put on trial and executed.”

The Daily Dot discovered on Sunday that certain types of content were being flagged by moderators after gaining access to a publicly accessible beta version of Truth Social used exclusively by the app’s developers.

Moderator accounts designed to teach the platform’s AI how to spot violations were found to be sharing posts containing everything from racial slurs and photos of pornography to calls for violence.

Two posts even specifically called on users to “storm the Capitol,” a suggestion that Truth Social is attempting to block account holders from promoting future violence. The AI was appeared to be being taught how to detect photos of firearms.

Another user who attempted to register an account designed to poke fun at former congressman Devin Nunes, who is currently the CEO of the Trump Media & Technology Group, said he was outright banned on Tuesday.

Truth Social’s attempts to develop a so-called family-friendly platform could ironically cause widespread backlash among his most prominent supporters.

Meanwhile, the launch of the app on Monday was beset by numerous issues including outages, long waitlists, and registration failures.