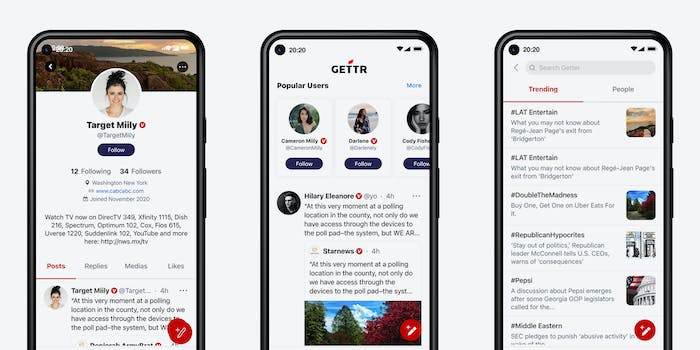 Donald Trump has yet to join 'GETTR.'

Known simply as GETTR, the self-described “non-bias social network” closely resembles Twitter’s design with its use of hashtags and trending topics.

The new app also comes amid reports that Trump has been attempting to set up a platform of his own after being banned from Facebook, Instagram, and Twitter after the Jan. 6 riot at the Capitol. Although Trump attempted to launch a personal blog, the site was ridiculed for its low traffic, leading the twice-impeached president to pull the plug.

Despite Miller’s close relationship with Trump, the former president does not yet appear to have an account on GETTR. It does appear, however, that Miller has reserved a spot for his former boss nonetheless.

However, Bloomberg News reports Trump won’t be joining the platform and still has plans for another one.

Available on the web, Android, and iOS, GETTR is the latest in a growing number of social media sites aimed at supporters of the former president. GETTR will be competing against other small-time social media sites such as Gab and Parler, two sites popular among far-right users.

An excerpt from author Michael Wolff’s upcoming book Landslide claims that Trump had offered to join Parler in exchange for 40% of the company. Ironically, Trump also allegedly demanded as part of the failed deal that Parler ban anyone who spoke out against him.