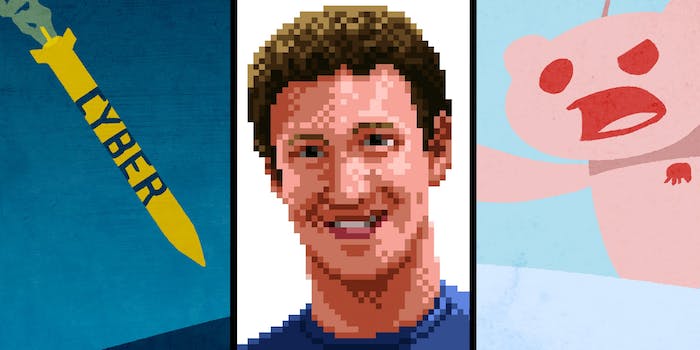 Important news you may have missed on Friday, Aug. 26.

Frank Ocean’s new album Blonde was reportedly downloaded illegally more than 750,000 times in the first six days, though the total number of downloads is likely much higher as individual song were not included in downloads tallied by analytics researchers.

“Wi-Fi signals saturate our cities. By tracking the signal distortions, a whole new avenue of spying opens up,” writes Patrick Howell O’Neill. A device called WiKey, which has some serious limitations, at least at the moment, allegedly can detect keystrokes with 93.5 percent accuracy.

A $2.26 million dark net ring has reportedly been brought down in Finland. The operation, which is said to include 40 kilograms of heroin, cocaine, methamphetamines and more, involved smuggling illegal drugs inside birdhouses, according to local reports.

Google is scaling back its fiber optic operations in response to a “disappointing rate of adoption,” Debug reporter AJ Dellinger writes. The company is reportedly switching its focus to delivering high-speed internet service wirelessly.

Dropbox is forcing longtime customers who haven’t changed their passwords since mid-2012 to do so now. The company says it hasn’t been breached; a four-year-old list of credentials were recently discovered, however. We have a few suggestions to help you create a strong password.

Facebook’s efforts to circumvent ad blockers may violate European law, Jonathan Keane writes for Layer 8. As adblock detectors require access to information on a device, privacy advocates argued before the European Commission that they too must fall under a directive enforcing opt-in requirements for the use of cookies.

The word “fuck” is used by Trump supporters in roughly 6 percent of comments, while Clinton supporters only say “fuck” around 2 percent of the time, according to research into Reddit communities. Overall, Republicans use profanity 135 percent more than Democrats. Still, the two camps have a lot in common when it comes to language.

As Clinton delivered a speech this week denouncing the alt-right, a cry rang out from the crowd. A man who shouted “Pepe!” during the speech later said he was incensed by Clinton’s attacks on “a true patriot”—wait for it—Alex Jones.

Our coverage of Facebook’s meme war continues. Read the FTC complaints acquired by the Dot which were filed en masse against Mark Zuckerberg. Journalist Miles Klee reports from the front lines of “The Zuckening.”

Have you seen this man?

British companies have been granted licenses to export powerful spyware to authoritarian regimes, such as those in Turkey and Saudi Arabia. -via Joseph Cox, Motherboard

Here we have a surprisingly pleasant 4,500 word feature about the relationship between a family and their anxious rescue dog. -via Richard Gilbert, Longreads

“Serving as part-history and part-guide to the world of pseudocide (aka faking one’s death), “Playing Dead” peels back the layers behind the promise of anonymity and a new life only to discover the near impossibility of it all.” -via Tracy Moore, Vocativ

Donald Trump’s new campaign chief—Steve Bannon, the executive director of Breitbart News—is registered to vote in a key swing state at an empty house where he doesn’t live, an apparent violation of election law. -via Jon Swaine et al, the Guardian

The global cost of cybercrime is predicted to hit $6 trillion annually by 2021, a new study says. -via Dark Reading, Information Week