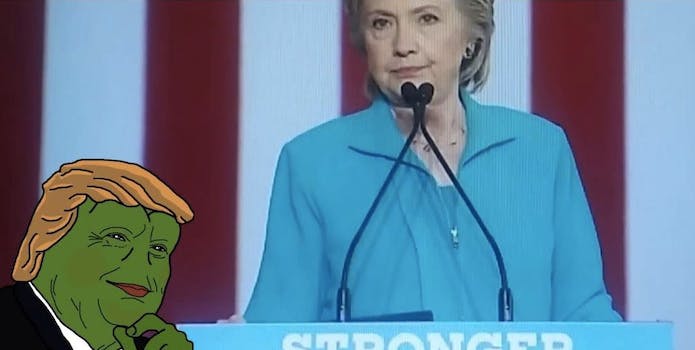 On Thursday, Democratic presidential nominee Hillary Clinton gave a speech denouncing the alt-right, a movement mostly composed of young white nationalists from online. As Clinton introduced the concept to her audience, a cry rang out from somewhere in the crowd:

Christ, here we go with the Pepe the Frog started as a generic meme character who could stand in for the poster and express almost any emotion, although rage and smug superiority were his go-to expressions. Now he’s an alt-right icon beloved of Trump supporters—Trump himself is often depicted as a bright green Pepe.

The guy who shouted “Pepe” at the Clinton event is apparently an anon from 4chan‘s /b/ board, and he was liveblogging from the balcony as fellow anons cheered him on.

Overall, a pretty harmless prank. But, as Deadspin points out, it’s totally appropriate that the memers were there to cry out as Clinton railed against their chosen political philosophy, which is part genuine racism and part trollish shit-stirring. While Clinton didn’t mention memes or Pepe in particular, it’s not surprising that anons would take her speech as a challenge.

The trollish right-wing subset of meme kids thrives when there’s a “boss” to defeat—see e.g. Gamergate‘s war on Zoe Quinn, Anita Sarkeesian, and Gawker Media—and Clinton is their current big bad. Pranking her rally is a rare Pepe indeed.

Update 1:38pm CT: Breitbart News, the alt-right website that gave us current Trump campaign chief Steve Bannon and continues to spin the news however it can for the GOP presidential nominee, interviewed a man who claims to be the one to shout “Pepe!” during Hillary’s speech. And Sean Lewandowski—no apparent relation to ousted former Trump campaign chief Corey Lewandowski—did indeed stream parts of the rally on Periscope.

“I had been planning on attending since I first read she was coming to Reno, originally I had no intention of doing anything other than documenting the event on Periscope… then she started attacking a true patriot, and someone I really look up to, Alex Jones,” Lewandowski told Breitbart.

“As for the ‘Pepe’ shout,” he explained, “[s]he gave me the opening by saying ‘alt right’ with a bit of a pause, so I pounced. It was just to kind of throw off her false narrative and a shout out to the fellow patriots on ‘Frog Twitter’ for all their hard work in trying to get Donald Trump into the White House. About [three] seconds after I screamed ‘Pepe,’ I was escorted out by Secret Service.”

Just 73 days to go until the election.