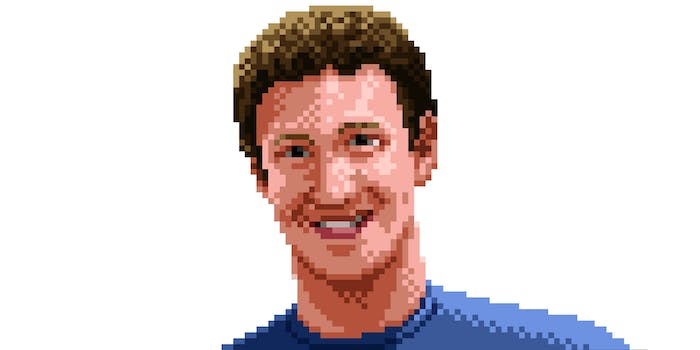 #TheZuckening is the next stage in meme pages’ crusade against Facebook

This time it's personal.

It’s no secret that the meme pages of Weird Facebook are in open revolt against the social media platform. As more and more groups are deleted, seemingly without warning and for unspecified community standards violations, the meme vanguard has organized and hit back.

In the first stage of their crusade, meme pages changed their avatars to an upside-down, pink-hued Facebook logo and encouraged members to flood the Federal Trade Commission with complaints about Facebook’s corporate policies regarding the removal of content based on user reports. The Daily Dot submitted a FOIA request to obtain some of those complaints, which range from officious and well-argued to mere jokes and abuse.

“Fuck the zucc,” reads one, for example, referring to Facebook founder and CEO Mark Zuckerberg. (To get “zucked” or “zucced” also means, in meme parlance, having one’s page summarily deleted.) “Yo, stop deleting meme pages. Shit is mad weak,” reads another. A third impassioned user wrote:

“facebook took wild guap from me and now is shutting down dank maymay pages left and right bruh smh why dey did dat rip to all the fallen meme pages lost but not forgotten, we needs revenge fam like rn #justice4harambe #justice4kevin #justice4wheremyshrimps like help us out facebooks meme game has been on the up like im talking 2008 /b/ type shyt homie we cant let this falter, we cant fail.”

But the vast majority of complaints highlighted what meme fans see as a lack of transparency in Facebook’s content policies and an apparent bias against irreverent, surrealist, sometimes politically incorrect humor. “Facebook claims to have a content review system despite content which is clearly against Facebooks community standards such as graphic gore and racial hate speech often remaining up even after it has been reported,” reads a typical message. “It appears that verified pages do not undergo the same process of review for offensive material. As a consequence, many non verified pages are simply shut down without any warning for what many deem arbitrary or trivial reasons,” another points out.

Now, even as these comments marinate, the second stage of the meme pages’ retaliation has begun. It’s called #TheZuckening. The idea is simple: Report Zuckerberg’s own Facebook account for anything you want.

This part of the campaign is less formalized and more anarchic—and ultimately symbolic, as the admin for the popular page “I play KORN to my DMT plants, smoke blunts all day & do sex stuff,” who wished to remain anonymous, told the Daily Dot. As many in the meme community have pointed out, “You can’t zucc the zucc.”

“No one expected any result besides humor and fun and to keep momentum going,” I play KORN’s admin said of the mass action, adding, “I think a really important thing is to somehow get fb to tell us what its process of deletion is.” 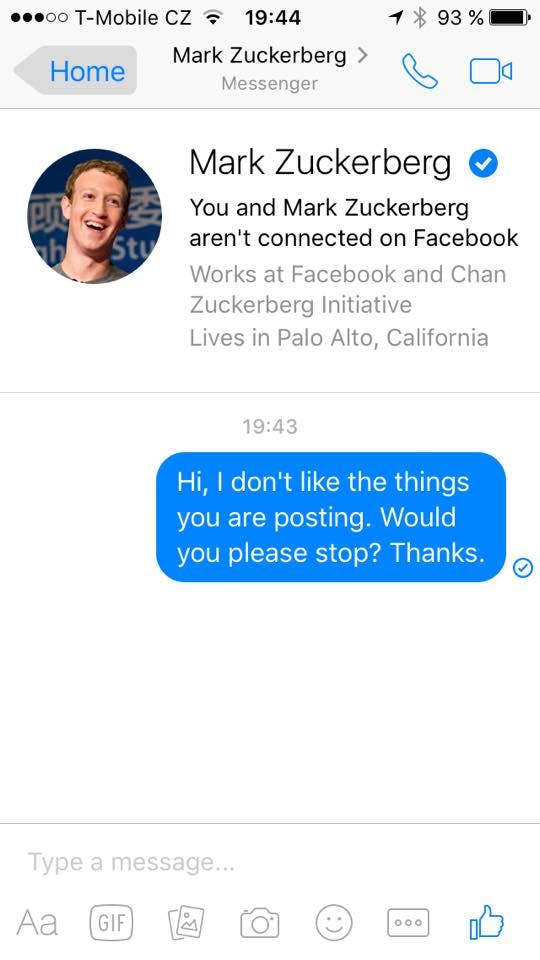 In a private Facebook group chat with several other meme page admins, there was a general consensus that Facebook was probably more negligent and indifferent to the community than outwardly hostile toward it. (The Daily Dot reached out to Facebook for comment on this campaign, but received no response. We will update this story if and when they get back to us.)

“It isn’t in their best interest to autodelete pages reaching millions,” said an admin from the Content Zone page. “Imagine if the rest of life worked like FB … You ask to see the manager enough times and they shut down the applebees Just write enough shitty Yelp reviews Government deletes the restaurant.

“They don’t take into account the validity of the complaints—someone is always going to be upset that’s not an ecosystem where anything can grow for long,” he added. “There’s no legit reason to let randos be destructive just a liability-minded policy and a blind algorithm.”

Another admin agreed that Facebook is “giving power to the negative reports over the positive feedback.” I play KORN’s admin described the report system as “very general and at least partly automated,” which simply compounds the problem. His own personal account, comprising eight years of life and memories, was “deleted permanently for an infraction that was never displayed.” The email about it came from a name with no exact job title appended. “The problem is, there is no accountability for what they are doing, no customer service, no one to explain. They are essentially putting the censorship power in the hands of anyone who will issue a report.” 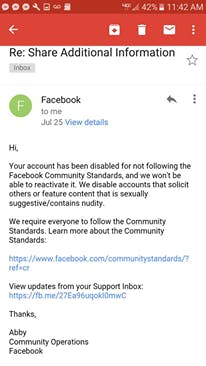 via I play KORN

Still, that leaves the question of who exactly is reporting these pages so that the full brunt of Facebook censorship is brought to bear on them. It ranged from trolls instigating “petty” meme drama, the admins said, or just “one pissed-off aunt.” The fact is, the popularity of their work ensures attention from ideological enemies. “When a meme gets 1000 shares, its going to bring in the wackadoos from any political side,” said I play KORN’s admin. And without the apparent protection or benefit of the doubt accorded to officially verified pages, official action can be swift and decisive.

There are a number of reasons meme pages don’t get verified on Facebook—their penchant for anonymity is one. But in the cultural sense, one admin argued, the meme-makers are like “graffiti artists,” making art through “a media that is completely not made for it.” Another admin said that “Zuck should want a platform that promotes creativity.”

“Facebook doesnt want to promote creativity, it wants to promote activity,” I play KORN’s admin argued. “But fb doesnt need creativity to be active. Thats why we are ‘weird facebook,’ because we are using a medium that is bland and cold to make things and be warm and alive.”

And as for Zuckerberg himself? Does he love or hate memes? Does he actually have a stake in how his company manages or censors them?

“I don’t think he’s seen one yet—he’s very busy,” theorized one admin. “He probably thinks he invented them,” said another. “People don’t laugh when he brings up dat boi two months late at his dinner parties,” quipped a third.

“It’s not that he has something against them,” said I play KORN’s admin, “it’s that he is making dough off free entertainment labor, and using a reporting system that allows the entertainment workers to have their careers ended by an algorithm or a single person or whatever they have going on in there.” The process happens inside an impenetrable black box.

Asked what they’d tell Zuckerberg personally, one admin said: “I’d say ‘hey dipshit you’re screwing yourself over hire some actual people to review this stuff. And I appreciate your hard work with the [Chan Zuckerberg] Initiative.’” Beyond that, he wanted “an apology for our fallen soldiers—on Chan Zuckerberg Initiative stationery.”

But short of an exodus to another platform, it seems that Facebook and the meme crew are destined to live in an uneasy state of paranoid flux. Here in 2016, Zuckerberg’s product—a social network binding more than a billion people worldwide—is yielding more ironic trends, inside jokes, trolling shitposts, and renegade art than ever before. At the same time, it has struggled with how to filter and curate this staggering volume of content for its audience. It has already conquered media companies, who depend on it for traffic. So far, though, it’s been unable to tame the true wilderness.