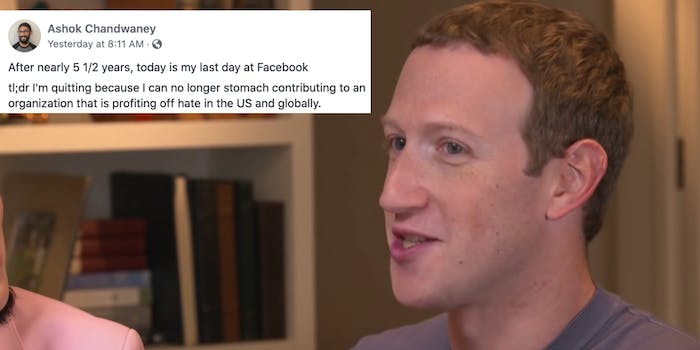 Facebook engineer quits in protest over company ‘profiting off hate’

'I can no longer stomach contributing to an organization that is profiting off hate.'

A software engineer at Facebook quit on Tuesday after accusing the social media platform of “profiting off hate.”

Ashok Chandwaney, who worked at the company for the past five years, outlined their reasoning in an open letter on Facebook.

“I’m quitting because I can no longer stomach contributing to an organization that is profiting off hate in the US and globally,” Chandwaney wrote.

Chandwaney says the breaking point recently came after Facebook failed to swiftly remove a militia group’s event page calling on members to show up to protests in Kenosha, Wisconsin. Two people were later shot and killed at the protest.

Facebook’s decision not to remove a post by President Donald Trump in which he stated that “when the looting starts, the shooting starts” was also cited by Chandwaney.

Although Facebook recently announced a crackdown on movements tied to violence, including militia groups, Chandwaney argues that the company’s only true concern is keeping critics at bay.

“It seems that Facebook hasn’t found the business value to be had in aggressively pursuing the existing credible strategies to remove hate from the platform—despite pressure from civil society, our own employees, our own consultants, and our own customers via the boycott,” Chandwaney adds.

Chandwaney is far from the first person to resign from Facebook in protest.

Owen Anderson, another software engineer, announced his resignation on Twitter in June over the company’s inaction towards the president’s account.

“I am happy to no long support policies and values I vehemently disagree with,” Anderson said.

Timothy Aveni, yet another software engineer, also quit over the president’s account at the time in a statement on LinkedIn.

“Over and over he posts abhorrent, targeted messages that would get any other Facebook user suspended from the platform,” Aveni said.