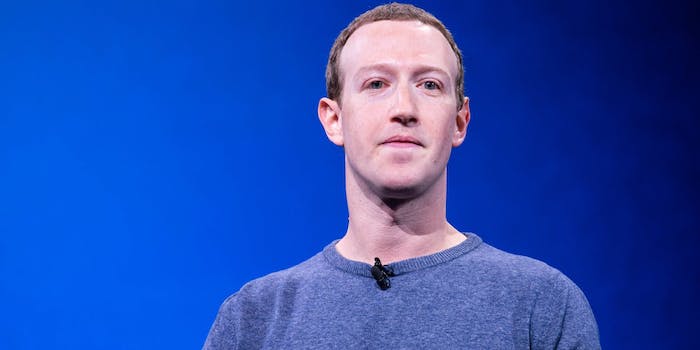 Facebook employees are quitting over Zuckerberg’s inaction on Trump

One quit on Twitter, and the rival platform reached out him regarding a job opportunity.

Facebook employees held a virtual walkout on Monday over Mark Zuckerberg’s apparent hands-off policy when it comes to President Donald Trump. Now, some say they are quitting.

After Twitter took the unprecedented step to flag one of Trump’s posts for “glorifying violence” and fact-check another, Zuckerberg criticized that decision. Zuckerberg also refused to remove or flag the same posts posted to Facebook by Trump.

Zuckerberg recently defended the platform’s inaction when it comes to Trump after receiving backlash from employees and people online.

He called the inaction a “tough decision” during a Q&A with employees. All but one of the employees, according to a New York Times report, had a “pointed” response.

“I am happy to no long support policies and values I vehemently disagree with,” Owen Anderson, one of the software engineers to quit, announced on Twitter.

A Twitter employee later reached out to Anderson for a job opportunity at the rival platform.

Another software engineer, Timothy Aveni, announced via LinkedIn his resignation.

“Over and over he posts abhorrent, targeted messages that would get any other Facebook user suspended from the platform,” Aveni wrote.

Others expressed their discomfort with Facebook’s handling of Trump’s inflammatory posts.

“I don’t know what to do, but I know doing nothing is not acceptable. I’m a FB employee that completely disagrees with Mark’s decision to do nothing about Trump’s recent posts, which clearly incite violence. I’m not alone inside of FB. There isn’t a neutral position on racism,” Facebook design manager Jason Stirman tweeted.

“Censoring information that might help people see the complete picture is wrong. But giving a platform to incite violence and spread disinformation is unacceptable, regardless who you are or if it’s newsworthy. I disagree with Mark’s position and will work to make change happen,” Andrew Crow tweeted.