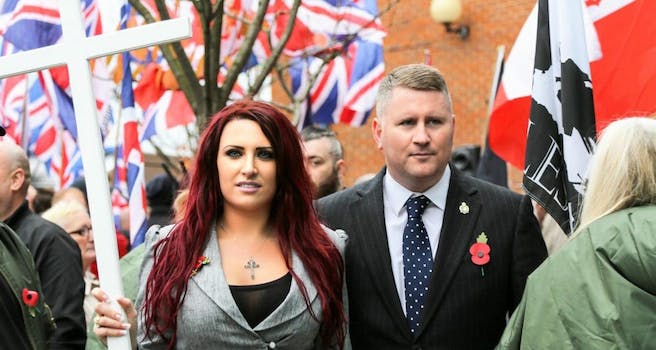 “We are an open platform for all ideas and political speech goes to the heart of free expression,” Facebook said of the banning decision in a published statement. “But political views can and should be expressed without hate. People can express robust and controversial opinions without needing to denigrate others on the basis of who they are.”

The move also resulted in a permanent ban for the political group’s prominent leaders, Paul Golding and Jayda Fransen. The pair were both imprisoned last week in the United Kingdom for hate crimes, accused of “religiously-aggravated harassment.” Golding was sentenced to 18 weeks, while Fransen was given 36 weeks.

The group found international notoriety in November when President Donald Trump retweeted three violent, anti-Muslim videos that had been posted online by Fransen. At the time, Trump said that he did not know who Britain First was, although the ultra-nationalist group’s leaders responded enthusiastically to the retweets as affirmation.

Facebook did not cite specific posts made on the group’s page to provoke the ban, but the BBC reports that the offending posts included videos that stoked hatred against Muslims and a caption that compared Muslims to animals. The company said that the decision only came after several warnings were ignored.

Just this month, a report released by charity Hope Not Hate assessed the content and found, alarmingly, that the far-right group was the second most ‘liked’ political page in the United Kingdom—led only by the royal family.

“More than any other group, Britain First overstepped the mark, even going as far as to show ISIS-style beheadings,” Matthew Collins, the charity’s researcher told the Guardian.

“The group became the real ‘Facebook fascists’ and there may be reason to believe the group could even fold if Facebook stays strong and follows up on the mirror and back-up sites Britain First has,” he said of the potential impact of Facebook’s stance.

Within the U.K. political establishment, however, the action was praised and encouraged.

“I’m very pleased to welcome the action that Facebook has taken,” Prime Minister Theresa May said in parliament, “I hope other companies will follow.”