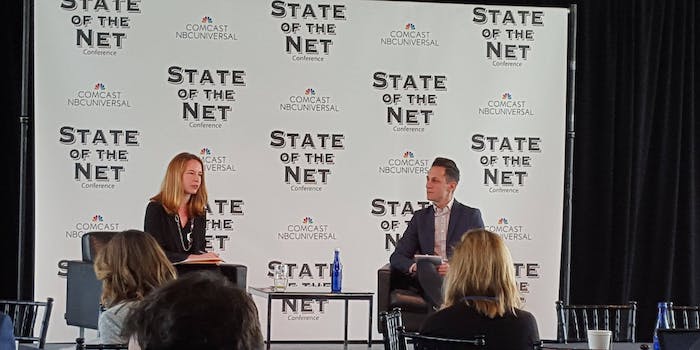 The encryption debate raging inside the U.S. government peeked out into the open at an Internet policy conference on Monday, as a high-ranking Justice Department official and an FTC commissioner offered dueling views of the proper balance between liberty and security.

The back-to-back comments by Assistant Attorney General Leslie Caldwell and FTC Commissioner Terrell McSweeny at the State of the Net conference offered a distilled version of the battle over government access to encrypted products.

While Caldwell, the head of the Justice Department’s Criminal Division, admitted that encryption was vital to all facets of online activity, she also warned that it was one of several “obstacles that can and do stop our investigations in their tracks.”

“There needs to be a way for law enforcement to retrieve critical information” from encrypted devices, she told the audience at the start of the Internet Education Foundation’s yearly policy event, held at the Newseum in Washington, D.C.

Caldwell’s position, supported by Attorney General Loretta Lynch and FBI Director James Comey, is that technology companies should design their encryption in such a way that they can break through it when the government presents them with a search warrant.

To placate customers unsettled by revelations of U.S. mass surveillance programs, Apple, Google, and other firms have implemented strong encryption that even they cannot break. This has presented a challenge for law enforcement and intelligence officials fighting crimes as diverse as human trafficking and terrorism. Comey, one of the most fervent opponents of unbreakable encryption, has called the phenomenon of criminals and terrorists hiding behind encryption “going dark.”

Technologists, private advocates, and security experts argue that there is no way to design encryption that only the right actors can break for the right purposes. They warn that adding so-called “backdoors” to commercial encryption will weaken the security of Americans’ personal information and drive criminals to foreign platforms not covered by U.S. law. This decades-long argument is known as the “crypto wars.”

In a discussion that followed Caldwell’s remarks, McSweeny, the newest appointee to the five-member Federal Trade Commission, all but rebutted the Justice Department’s position. McSweeny, whose purview as an FTC commissioner includes consumer privacy and data security, said she was “personally opposed” to a government backdoor mandate and warned of the data-security implications of weakening encryption.

“As a person charged with thinking about consumer protection, I deeply worry about things like mandatory backdoors and exceptional-access systems in consumer-facing products,” McSweeny said. “It has the consequence of potentially making consumer data less secure.”

Caldwell acknowledged that encryption was a thorny issue in Washington and libertarian-leaning Silicon Valley, but she reiterated the Obama administration’s position that technical experts were capable of figuring out a mutually agreeable solution.

It is worth noting, however, that these very experts have repeatedly warned the government that such a compromise on encryption is technologically impossible.

Supporters of strong encryption have found an advocate in McSweeny, who joined the FTC in 2014. As one of the federal government’s highest-ranking consumer-protection enforcers, she is well positioned to advance the argument that backdoors and other forms of guaranteed access weaken protections vital to global commerce and communications.

“From a consumer protection point of view,” she said on stage, “we have to be very, very careful in undermining that security.”

But in her remarks, Caldwell seemed not to share this fear. She echoed the optimistic vision of public–private sector cooperation that senior law-enforcement officials have long used to dismiss the furor over encryption. In her view, the encryption debate was no more insurmountable than other once-combative questions that society has since resolved.

“Throughout our history, this country has always found a way to move forward while maintaining the values [that] make us uniquely who we are,” she said, “and we’re certain that we’ll find a way to do that again in the digital age.”