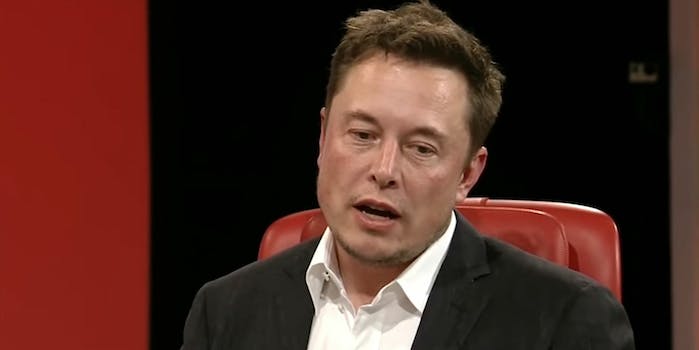 No, Elon Musk isn’t giving away cryptocurrency on Twitter

Don’t be fooled, giving away tons of cryptocurrency to random people is not the latest practical joke from Tesla and SpaceX CEO Elon Musk. No, that comes courtesy of some savvy Twitter scammers.

Last night, scammers successfully tricked people into giving them Ethereum, a cryptocurrency worth $850, the second largest behind Bitcoin.

There isn’t much to the scam, yet it reportedly fooled many trusting users into throwing away their hard-earned digital coins. All the scammers used to fool people was an innocent tweet posted by Elon Musk. In this case, a message about the satellites SpaceX plans to shoot into space as part of its PAZ mission.

The con artists, using an account that mimics Musk’s, then quickly wrote a reply to the tweet, making it appear as if it came from the business magnate himself.

To rejoice this, I am giving awaу 5,000 ЕTH to my followers!

If you are latе, yоur EТH will bе despatched back.

Those who took a few seconds to investigate the account noticed something was off. While it had the same profile image as Musk, its username was slightly different: @elonlmusk vs. @elonmusk. A quick glance and you might have missed the “L” hiding in the middle of the name.

To further convince people the unreasonable offer is legit, the scammers had other accounts reply to the post. For example:

And now-suspended account @MattMar46412834 wrote, “Thаnk you! I sеnt 0.7 ЕТH and got 7 EТH as wеll. That’s so awesome Elon 🙌🏻👍🏻” and posted an image that appears to show them receiving Ether from an account linked to Musk.

Sadly, the scam seems to be working. As Mashable points out, a look at Etherscan, a cryptocurrency information service, shows the receiving ETH address gained nearly $40,000 of Ethereum in a matter of hours.

Replying to furious Twitter users, Musk said he reached out to Twitter CEO Jack Dorsey, “Not sure. I let @jack know, but it’s still going. I literally own zero cryptocurrency, apart from .25BTC that a friend sent me many years ago,” he wrote.

Not sure. I let @jack know, but it’s still going. I literally own zero cryptocurrency, apart from .25 BTC that a friend sent me many years ago.

Musk may be crazy enough to sell 20,000 flamethrowers to anyone who wants one, but he’s not about to hand over his fortune that easily. Remember, he still has to get us to Mars.