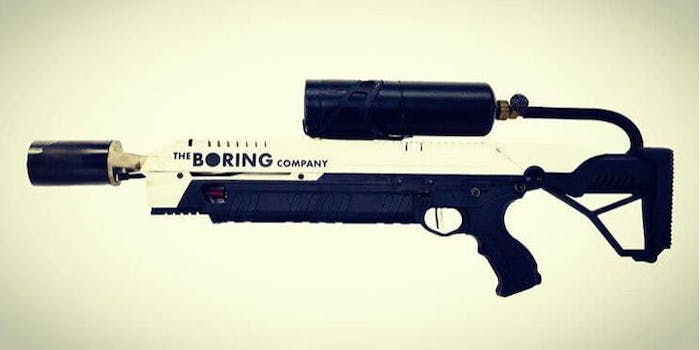 What seemed like a joke not long ago has turned into a bizarre money-making scheme and proven that if Musk is involved with a product, people will buy it. The business magnate says he already sold 7,000 Boring Company-branded flamethrowers of the 20,000 up for pre-sale. That’s $3.5 million spent on flamethrowers.

It’s still not clear what happens when you purchase the flamethrower, but all signs suggest you will, indeed, receive one. We know for a fact they exist. Musk posted a short video on Instagram of him demoing the fire-breathing device. It’s downright terrifying.

At this point, you’re probably wondering if it’s even legal to own a flamethrower. Incredibly, 40 states have no laws against owning them, the Fiscal Times reported in 2013. The Boring Company says it’s also selling the device overseas, though it remains a mystery how it will skirt stricter weapons regulations.

Musk also joked (we think) that the flamethrower was “sentient,” its safe word is “cryptocurrency,” and it “comes with a free blockchain.”

Surely, no one who threw down $500 was in the market for a flamethrower. Perhaps we should have expected these sales anyway considering Musk was able to secure hundreds of thousands of preorders for a car that will take years to ship. Two people even trust the “real life Tony Stark” enough to fly to the moon on an untested SpaceX rocket.

There must be another reason people are all of a sudden buying flamethrowers, right? One theory was that Musk was creating a zombie apocalypse to increase demand for the device. He quickly debunked the rumor. He took it a step further and changed his Twitter bio to “Zombie Defender.”

After 50k hats, we will start selling The Boring Company flamethrower

Elon Musk first teased the flamethrower on Twitter, promising to make it after he sold 50,000 Boring Company hats. At first, everyone thought it was a joke. Then a Redditor discovered the product page and one user was able to guess its astonishingly awful password: flame. Twitter user FalconGridFin then grabbed a screenshot of the prototype flamethrower and posted it to his account.