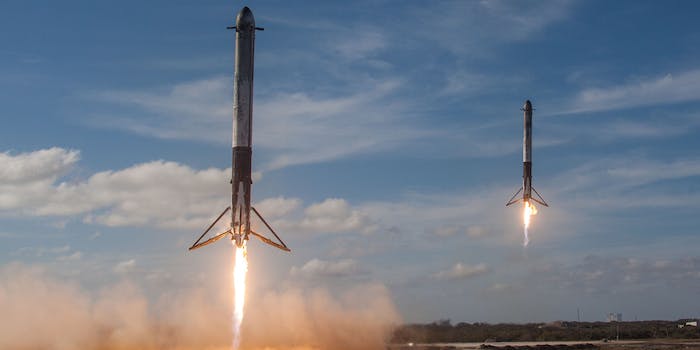 How to watch the SpaceX Falcon 9 PAZ mission launch

SpaceX's next mission sends a pair of internet-beaming satellites into orbit.

It’s another big week for SpaceX. On Thursday*, Elon Musk‘s company will send the PAZ mission into orbit, a Falcon 9 rocket with an important double payload. Onboard will be the PAZ satellite, developed by the Spanish Ministry of Defense, as well as a pair of microsatellites designed to test a satellite-based internet network called Starlink.

It’s the latter that we’re most excited about, and why this launch is significant for most of us. Here are the details of this latest SpaceX endeavor—as well as how you can watch it live.

What is the PAZ Mission?

The PAZ Mission will be the 49th Falcon 9 rocket launch since 2010. It’s so named because of the satellite it will be releasing into orbit. The PAZ satellite is an observation satellite loaded with advanced radar instrumentation. It will capture imagery for the Spanish military, other governments, and commercial clients.

The satellite will orbit Earth 15 times per day over its lifespan—five and a half years—snapping images of cities, oceans, and landscapes with a resolution level of up to 25 cm. Also on board is a Radio Occultation and Heavy Precipitation experiment (ROHP) designed to identify and quantify “heavy precipitation events.”

Initially proposed back in 2015, Starlink will eventually be an array of 12,000 satellites beaming low-cost broadband internet down to the Earth below. This enormous satellite constellation will improve on existing satellite internet services by offering a reliable connection, broad coverage areas, and acceptable levels of latency. It will do this with roughly 7,500 satellites orbiting 200 miles above the earth’s surface, and 4,400 more situated 700 miles up. With this rocket launch, Musk will send the two prototype satellites into orbit: Microsat 2a and 2b.

Ultimately, it’s a very complex, exceedingly costly endeavor. However, if all goes well, Starlink could go live in 2024. Revenue from these satellites could go toward funding missions to Mars.

How to watch SpaceX’s PAZ Mission

The rocket is set to launch at 8:17 AM CST (14:17 UTC) on Wednesday, Feb. 21 from Vandenberg Air Force Base in California. The satellite should deploy about 11 minutes after that.

If for some reason the mission needs to be delayed, there’s a backup launch opportunity the following day at the exact same time.

Earlier this month, we watched as SpaceX launched Falcon Heavy into the atmosphere. The launch was delayed several times because of “upper-level wind shear,” but ultimately proved successful.

Update 8:36am CT, Feb. 21: Due to “strong upper-level winds,” this morning’s anticipated launch of the PAZ mission has been scrubbed, so SpaceX will fall back on the backup launch window at the same time tomorrow—6:17am PST, Feb. 22.