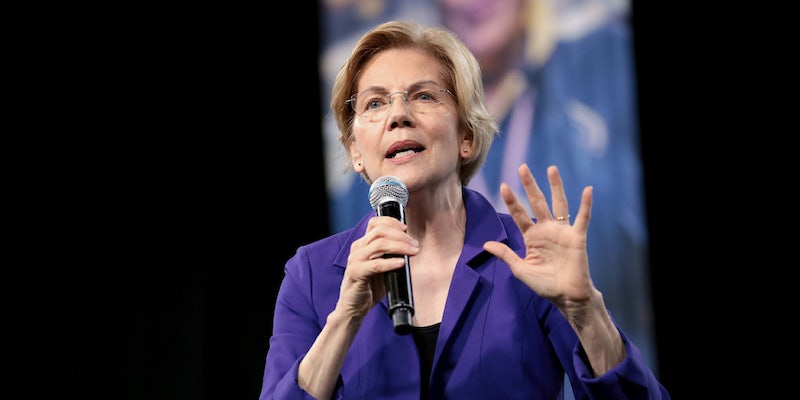 Sen. Elizabeth Warren (D-Mass.), a 2020 Democratic presidential candidate, denied that she spoiled a Game of Thrones plot point when speaking about student loan debt in Pennsylvania on Monday night.

“The burden put on people who are trying to get an education so they can build a future—it’s like dumping rocks on them,” she said during a speech.

Student loans have been among the many policy proposals the 2020 hopeful has raised so far in the early primary cycle.

As the Hill pointed out, when asked by a reporter following the event whether or not she thought the “dumping rocks” metaphor was a spoiler, Warren defended herself, saying that Game of Thrones‘ latest episode had aired nearly a day ago.

“Game of Thrones is already out in public, now come on,” she jokingly said. “It’s a little hard to do a spoiler 21 hours later. But you’re right, the metaphor is in my mind.”

Q: "Did you watch Game of Thrones last night?"

Q: "Some people are saying you might have given a little bit away… a little bit of a spoiler… about student debt crushing students like rocks."

Warren: "Game of Thrones is already out in public, come on." pic.twitter.com/akWNf3okLP

During Sunday’s penultimate episode of Game of Thrones, Cersei Lannister and Jamie Lannister were killed when the walls of the Red Keep fell on them after being attacked by Daenerys Targaryen and her dragon.

Last month Warren wrote a piece on the Cut where she said that Daenerys was her “favorite” character.