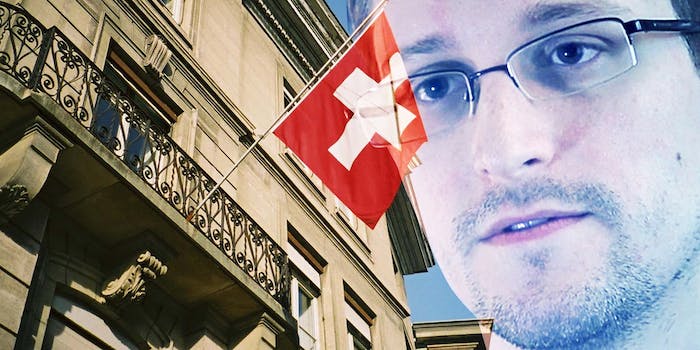 Edward Snowden says he wants to live in Switzerland

Is pressure from the Obama administration keeping Snowden in Russia?

Edward Snowden wants to leave Russia and live in Switzerland instead, he says.

The former spy-turned-whistleblower spoke remotely from Moscow to a crowd in Geneva on Thursday evening after a viewing of Citizenfour, the Oscar-winning film that documents his initial meeting in Hong Kong with journalists Glenn Greenwald and Laura Poitras, the film’s creator.

Following the events captured in Citizenfour, Snowden travelled to Russia with the help of WikiLeaks associate Sarah Harrison. Upon his arrival, the United States revoked his passport, trapping him in the country. While stranded in an airport transit zone, he reportedly sought asylum from over 20 countries.

“I would love to return to Switzerland, some of my favorite memories are from Geneva. It’s a wonderful place,” he said in response to a question on Thursday night at the International Film Festival and Forum on Human Rights. Snowden had previously been to Geneva while working undercover for the Central Intelligence Agency (CIA).

“I do think Switzerland would be a sort of great political option because it has a history of neutrality,” he said.

In August 2013, the Russian government offered Snowden a one-year temporary asylum, and later granted a three-year residency permit. While he’s previously said that he feels secure living in Moscow, he would prefer to live under asylum in a European country.

Snowden’s critics have often pointed to the fact that he resides in Russia to suggest that he’s somehow betrayed his own country. Snowden, however, says the Obama administration has interfered with his attempts to leave the country.

In July 2013, a plane transporting Bolivian president Evo Morales was grounded in Vienna after several European countries, including France, Spain and Portugal, refused to allow the plane to enter their airspace over suspicions that Snowden was on board. The plane was searched before it was allowed to depart Austria.

Snowden currently faces three felony charges in the United States. In 2013, Attorney General Eric Holder assured the Russian government in a letter that Snowden would not be tortured if returned to the U.S. and said the Justice Department would not seek the death penalty.

Snowden has repeatedly offered to return to United States and stand trial for revealing classified information. Both he and his lawyers have said that return home is contingent on a receiving a “fair trial,” which they say is not currently on the table.

Under the Espionage Act, Snowden’s role as a whistleblower will not affect his sentence. The government is also not required to demonstrate that the information he leaked damaged national security. Even if Snowden’s attorneys could demonstrate that he revealed a pattern of U.S. government abuse that may have otherwise remained secret, he could still be convicted under the century old law.

Since his case concerns classified information, a trial would likely take place behind closed doors, and its arguments kept secret. Further, U.S. attorneys could invoke the state’s secrets privilege in order  to prevent evidence of government abuse from being discussed in the courtroom.

Photo via Gideon/Flickr (CC BY 2.0) | Remix by Jason Reed