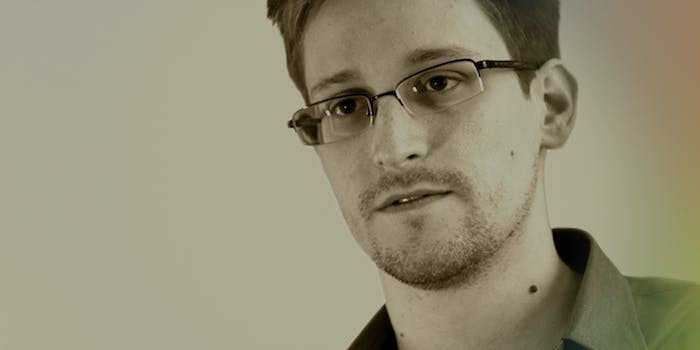 The rejection letters are starting to pile up for the NSA whistleblower.

The day after Edward Snowden made a mass appeal for clemency, the rejection letters are already pouring in.

Snowden, the contractor who stole NSA documents and fled the country to prove the agency’s secret spying programs, is still suspended in the international space of a Moscow airport.

The U.S., which has charged Snowden with espionage, can’t nab him from Russia—the countries have no extradition treaty, and Russian President Vladimir Putin won’t allow it, anyway. It has, however, revoked his passport, “leaving me a stateless person,” he said in a statement Monday.

According to the Guardian, he also applied to a host of new countries Monday, which brings his total to around 20.

Russia was the first of the most recent batch to respond. While the country hasn’t formally said no, and has insisted it won’t extradite him, it’s hinted that it won’t take him in, either.

“If he wants to stay here, there is one condition: He must stop his work aimed at harming our American partners, as strange as that sounds coming from my lips,” Putin said at a conference before Snowden’s latest batch of requests.

That’s probably not possible, as Snowden has already passed more NSA material to journalists who are waiting to release it on their own. Putin added he didn’t think that would happen anyway, as Snowden “feels himself to be a human rights activist.”

Bolivia, China, Cuba, Germany, Iceland, Italy, Netherland, Nicaragua, and Switzerland all have yet to respond.

Austria, Finland, Ireland, Norway, and Spain have all cited the same procedure that makes it impossible for them to directly aid Snowden. Like Iceland, those countries require a person to actually be in the country to apply for asylum, and they won’t issue him a passport to get there.

For a while, Ecuador looked like a likely haven, but its President, Rafael Correa, backpedaled after a personal phone call with U.S. Vice President Joe Biden.

Correa said Monday that Snowden would have to at least make it to an embassy to be considered, and that, contrary to how it had seemed earlier, Ecuador would not grant Snowden emergency travel documents. WikiLeaks founder Julian Assange has spent the last year ducking sexual assault charges in Ecuador’s embassy in London.

And Polish Foreign Minister Rados?aw Sikorski tweeted that Snowden’s letter “does not meet the formal application for asylum. But even if true, I would not give a positive recommendation. [Translated from Polish via Google.]

The only one of Snowden’s 21 countries to give him a positive response is Venezuela, though it’s unclear if they actually even received a request from him. News reports say the country was on Snowden’s list of applications, though according to English-language Venezuelan paper El Universal, President Nicolás Maduro said Tuesday that Snowden hadn’t yet applied.

However, Maduro did offer encouraging words for Snowden. “He has not killed anyone; he just said the truth,” Marudo said, calling for “international protection” for him.

If Snowden’s to get that, it might need to come from Maduro himself.

UPDATE: Italy has rejected Snowden’s application because it was faxed in, RT is reporting. Like many other European countries, it too requires Snowden to be physically present to request asylum.

UPDATE 3: France rejected Snowden’s asylum request Thursday. He has now been turned away by 12 of the 21 countries he has applied to.