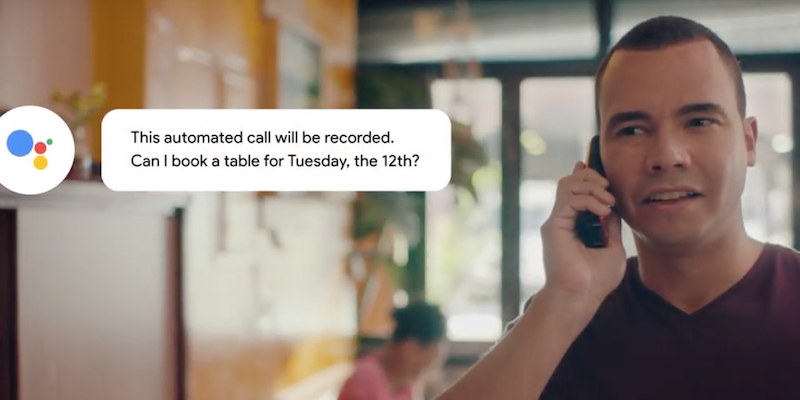 Duplex addresses ethical concerns by announcing itself at the beginning of calls.

To better explain how Duplex works, Google gave a hands-on demonstration with the software, the Verge reports.

At the start of every call, Duplex will announce itself with a message. In one example, the Verge said it went along the lines of, “Hi, I’m calling to make a reservation. I’m Google’s automated booking service, so I’ll record the call. Uh, can I book a table for Sunday the first?”

There are different versions of this message—Google may be testing which versions make the human on the end of the line feel the most comfortable—but each of these disclaimers was followed by a human-like “uh” or “um.” (The reason for that human-like tic is interesting: Apparently, call answerers did not respond well when the voice was more robotic. The pause also gives answerers a moment to respond and say, “No thanks, I don’t want to be recorded.” In this case, Duplex hangs up, and a human operator calls back instead.)

Google is only rolling out Duplex to a small number of “trusted” businesses initially. That is, these establishments and their employees will know that they’ll be receiving automated Duplex calls, which means it won’t come as a surprise or a deception. Businesses will also be able to opt out of Duplex altogether.

At first, Google is limiting Duplex to inquiries about business’ holiday hours, then will advance to restaurant reservations, and then will tackle hair appointments.

While the AI can get confused by some human interactions and decide to end the conversation, overall, it’s good at its job. Per the Verge:

It handled a bunch of interruptions, out of order questions, and even weird discursive statements pretty well. When a human sounded confused or flustered, Duplex took a tone that was almost apologetic. It really seems to be designed to be a super considerate and non-confrontational customer on the phone.

Google introduced the Duplex AI at its annual developer conference in May. Shortly after that onstage demo, Google was forced to backtrack due to reactions from the press and the public, which questioned whether the service was ethically sound. Google said later assured disclosure would be built into the product, which we’ve now seen with this latest demo.

All-in-all, Duplex looks to be a promising way to handle what can be a time-consuming task—but as for whether it’s more efficient than making an appointment online yourself, we’ll have to wait and see.