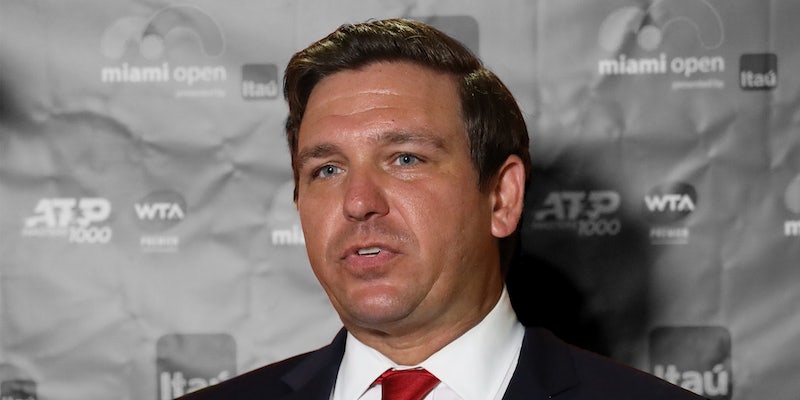 ‘They want to say the most incendiary things’: LGBTQ hate explodes online amid ‘Don’t Say Gay.’ It only took a handful of users

'Social media has given a limitless platform to amplify this hate.'

A new report finds that anti-LGBTQ content exploded online in the wake of Florida proposing the controversial Parental Rights in Education Act, dubbed the “Don’t Say Gay” bill by critics. It only took a small number of users to propel it.

Posts falsely maligning the LGBTQ community as “groomers” increased 400% in the wake of Florida proposing the “Don’t Say Gay” law, according to a report co-authored by the Human Rights Campaign and the Center for Countering Digital Hate. The report, “Digital Hate: Social Media’s Role in Amplifying Dangerous Lies About LGBTQ+ People,” states that online LGBTQ hate speech increased dramatically in recent months. Amid the surge in such speech, researchers found Twitter and Meta rarely acted on content that violated their respective policies.

The report found that a small number of users, many linked to extremist politicians like DeSantis, are leading the charge to malign the LGBTQ community online. “In a matter of mere days, just 10 people drove 66% of impressions for the 500 most viewed hateful ‘grooming’ tweets,” the report states.

Tweets by these 10 people were viewed 48 million times, per the report. These include DeSantis’ press secretary, Chaya Raichik of Libs of TikTok, and Reps. Marjorie Taylor Greene (R-Ga.) and Lauren Boebert (R-Colo.).

The top 500 hateful tweets about grooming were seen 72 million times. “Grooming” historically refers to how pedophiles lure their victims, but has lately been increasingly weaponized against LGBTQ people.

Late last month, Twitter told the Daily Dot that its rules prohibit using this slur to describe people based on their gender identity. Yet researchers found that Twitter failed to act on 99% of tweets reported for using the term “groomer” in violation of this policy.

Justin Unga, director of strategic initiatives with the Human Rights Campaign (HRC), said that politicians and other influential individuals are using anti-LGBTQ rhetoric as a cynical way to get attention.

“They’re inflaming the most extreme elements of their fanbase to gain notoriety or build a brand that they see as politically or financially profitable,” Unga told the Daily Dot in a phone conversation Wednesday afternoon. “…They want to say the most incendiary things whether it’s dangerous or violent because they get a buck out of it.”

“Despite similar policies prohibiting anti-LGBTQ+ hate content on both social media platforms, only one ad was removed,” the report states.

These ads were reportedly viewed more than 2 million times.

Meta didn’t respond to a request for comment sent via email Wednesday morning.

This report comes as the nation is in the midst of a precipitous rise in anti-LGBTQ legislation and incidents. It notes that Florida’s Don’t Say Gay law is just one of over 300 bills targeting LGBTQ people proposed this session, 25 of which passed. Nearly 20% of hate crimes in the United States targeted people on the basis of sexual orientation or gender identity in 2020, the most recent year for which Federal Bureau of Investigation data is available.

In addition to legislation targeting LGBTQ people, this year has seen angry Proud Boys disrupt a drag queen story hour, members of a white nationalist group get arrested at a Pride event where they allegedly planned to start a riot, and a gay couple accosted by a stranger angrily accusing them of molesting their children.

Unga said that the fact that a small number of individuals’ homophobic and transphobic content is reaching so many indicates that the increase in such incidents and speech isn’t happening naturally. “There is not an organic rise, but rather social media has given a limitless platform to amplify this hate,” Unga said. He puts the onus on the people who use hateful rhetoric, but says the platforms bear some responsibility.

“Social media companies ought to be regulating with the policies they’ve set forth,” he said.

The report by the HRC and Center for Countering Digital Hate (CCDH) emphasizes how Meta and Twitter’s inaction is contributing to the spread of extremism.

“The clear message from social media giants is that they are willing to turn a blind eye,” Imran Ahmed, chief executive officer of the Center for Countering Digital Hate, said in a release. “LGTBQ+ rights have been transformed after decades of hard-won progress, but progress is fragile unless you continue to defend it.”

HRC and CCDH offered some recommendations for Meta and Twitter to address the LGBTQ hate speech on their platforms. These include hiring and training content moderators to enforce policies prohibiting such speech, acting on hashtags that promote LGBTQ hate, suspending users who violate these rules, and increasing transparency in how they enforce their policies.

Failing that, they argue that platforms should be held accountable.

“Where platforms fail to behave in a reasonable way to respect and enforce the rights of users, and harm is caused to those users, platforms should be liable for that harm,” the report says.

Unga of the HRC finds the proliferation of hate speech against the LGBTQ community particularly worrisome as the nation approaches the midterm elections. He likens allowing such content to fester and spread to the online misinformation campaigns carried out during the last two presidential election cycles.

“Are they ready for the upcoming midterm elections?” Unga wondered. “Really that relates to any platform that is giving amplification to this kind of rhetoric.”

Update 7:32am CT, Aug. 11: Following publication, a Twitter spokesperson told the Daily Dot, “We remain committed to combating abuse motivated by hatred, prejudice or intolerance–particularly abuse that seeks to silence the voices of those who have been historically marginalized–but there’s more work to be done.” The company said it’s investing in tools and teams to address gaps in enforcement and reaffirmed that the “groomer” slur violates its policies when directed at people on the basis of gender identity. “Ultimately, we recognize that Twitter is at its best when every community feels safe and comfortable participating. We continue to engage experts and impacted communities on our work to support LGBTQ safety.”