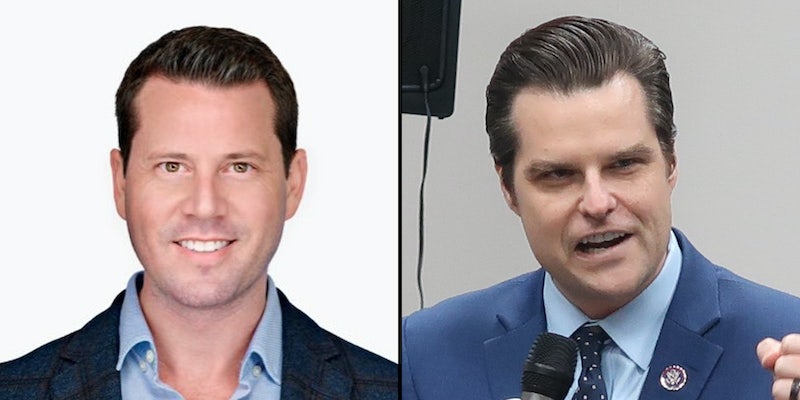 He also donated to Lauren Boebert.

Seth Dillon is among the crop of conservatives who’ve lately been ginning up panic about pedophiles and groomers. He’s also one of the top donors to Rep. Matt Gaetz (R-Fla.), who’s being investigated for child sex trafficking. Gaetz denies any wrongdoing.

Last week, Gaetz voted against a bill to help victims of sex trafficking. It’s not the first time he’s voted no on anti-sex trafficking legislation.

Dillon, who owns the right-wing satirical site the Babylon Bee, has repeatedly shared his scathing thoughts about those he believes guilty of sexual misconduct towards children. He was among the group who went after Netflix for supposedly sexualizing children over the 2020 film Cuties about a hip-hop dance troop of little girls.

At the time, he called for “every adult involved” to be “registered as a sex offender.”

“And he maintained six feet of distance the whole time while asking young women if they enjoy sex with much, much older men,” he wrote on Twitter.

Dillon is among those conservatives who have recently taken to sounding off on “grooming,” which historically refers to how child sex predators lure their victims but lately has been misappropriated to attack LGBTQ people.

Earlier this week, Dillon tweeted, “If nearly 200 teachers have been charged with sex crimes so far this year, how many are out there who just haven’t been caught yet?”

“And how many are actively building trust, grooming their underage victims for sex crimes down the road?”

Such sentiments haven’t dissuaded Dillon from donating generously to Gaetz. Gaetz is being federally investigated for child sex trafficking, which he denies. The alleged victim was 17 at the time, when Gaetz was in his late 30s. Gaetz’s former right-hand man is accused of targeting the girl in 2017.

According to Federal Election Commission (FEC) records, Dillon and his wife donated $11,600 to Gaetz in March.

Dillon didn’t respond to a request for comment sent via the Babylon Bee’s contact page on Thursday.

Gaetz isn’t the only member of Congress with a checkered record who’s received cash from Dillon.

Boebert’s husband was arrested for showing his penis to teen girls in a bowling alley in 2004. He pled guilty to public indecency and lewd exposure. Boebert, who was with him that night, nevertheless insists he didn’t show the girls his genitals.

In addition to Gaetz and Boebert, records show that Dillon has donated over $10,000 to J.D. Vance, a Republican running for Senate in Ohio.