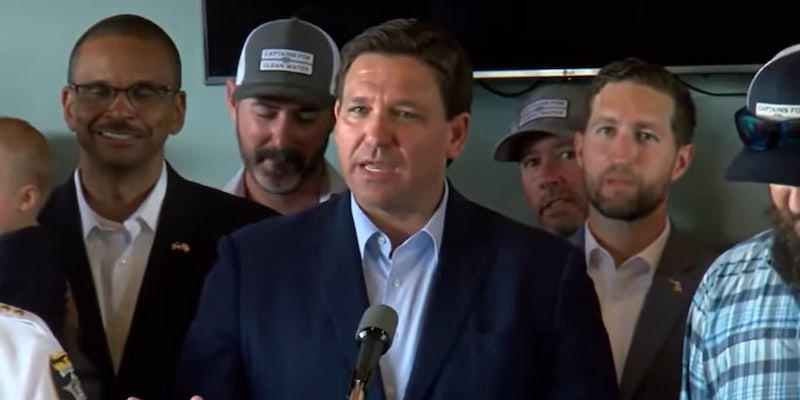 The burlesque performer is not in drag, either.

Florida Gov. Ron DeSantis‘ (R) spokesperson tried to back up his latest attack on LGBTQ people by tweeting a photo of a “drag performer” who was not involved in the controversy DeSantis is stoking. Nor is she a drag perform.

It’s also a photo that previously made the rounds as a neo-Nazi meme.

Over the weekend, DeSantis escalated his Pride Month attacks on the LGBTQ community by saying he wants authorities to investigate families who take their children to drag shows. His comments followed a drag show in Dallas, Texas that families attended, which prompted Texas lawmakers to try and introduce legislation.

DeSantis claimed that children as young as nine or 10 “were putting money in the underwear” of drag performers.

When a reporter from LGBTQ Nation emailed DeSantis’ office asking whether he’d seen young children put money into drag performers’ underwear, his spokesperson Christina Pushaw tweeted a screenshot of their email and a photo of a “drag performer” getting tipped by a little girl.

That image isn’t from the Texas show. It’s of Bella Blue, who isn’t in drag. She’s a well-known cisgender female burlesque dancer from New Orleans and the picture is years old.

Pushaw told the Daily Dot that she got the photo from a tweet by Seth Dillon, the chief executive officer of the Babylon Bee. Dillon tweeted the image on June 5 and incorrectly identified Bella Blue as a drag performer.

“A small child—perhaps 5 or 6—stuffs money into the underwear of a nearly naked drag queen as parents look on, smiling,” Dillon wrote.

“I just went to his page and saw that he posted this thread, so I shared it,” Pushaw said via Twitter direct message. “I agree with everything he said.”

Dillon quote tweeted a correction on June 7. Pushaw tweeted the image and incorrectly described Bella Blue as a drag queen on June 8, trying to try her to the Texas story.

Pushaw said she didn’t know the performer is a cisgender burlesque dancer when she tweeted the image.

“I did not see Seth’s correction until now, when I went to his page. I retweeted it,” she said.

Pushaw appears to have retweeted Dillon’s correction after the Daily Dot contacted her.

This isn’t the first time that photo has reportedly been used to push a political agenda. According to Twitter user @Esqueer_, the picture previously made the rounds as a neo-Nazi meme.

The meme included the caption, “And then one day, for no reason at all, people voted Hitler into power.” Neo-Nazis often use the phrase in memes.

“This was pulled from a widely circulated Nazi meme 3 years ago of a Facebook post from burlesque dancer who is a cis woman,” @Esqueer_ replied to Pushaw’s tweet on Wednesday. “This was not drag, nor did it happen in Dallas. Care to comment why you’re resharing Nazi disinformation and propaganda?”

“She loves dishing it but can’t take getting called out,” @Esqueer_ tweeted later that day. “Second time getting blocked by her after she curiously unblocked me this week.”

Pushaw told the Daily Dot she didn’t know about the image’s prior life.

However, when others posted the image on Twitter, people responded they’d seen it as a neo-Nazi meme as well.