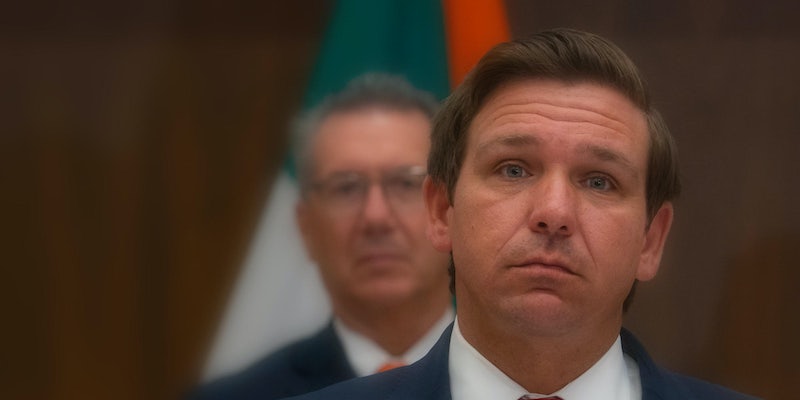 ‘He yelled right at them, unmoved’: Republicans blamed after stranger accuses gay couple on Amtrak of molesting their own children

'We all know where that comes from.'

The internet is blaming Republicans for a viral story about a random stranger allegedly accusing a gay couple of molesting their children. Internet users believe he was partly inspired by the recent wave of anti-LGBTQ legislation and rhetoric spearheaded by Republicans, such as Florida’s controversial law regulating classroom discussion of sexuality and gender that critics have dubbed “Don’t Say Gay.”

Twitter user @Robbiepierce (“Pierce”) shared the story on Twitter early Wednesday morning. He said it happened several hours into his family’s journey by train for a spring break trip.

“A man was suddenly standing next to me, shouting across me at my 6yo son, ‘Remember what I told you. They stole you. They’re pedophiles,'” Pierce wrote.

Pierce said that he stood up and told the man to get away from his family.

Pierce said his son and 5-year-old daughter began “openly crying, petrified,” but the man was indifferent to their fear and anguish. The Daily Dot has not independently verified his story.

“He yelled right at them, unmoved: ‘These guys aren’t natural. Homosexuals are an abomination. They steal and rape kids.'”

“It was suddenly no longer an absurd, abstract attack in an online comments section or a distant legislative session,” Pierce wrote. “These horrors were being screamed at my sweet bewildered son.”

Pierce said he took the children to another car while his husband “went into papa bear mode and shouted the man away from us.”

The confrontation ended when a conductor arrived. Afterward, their young children wept for nearly an hour, Pierce said, and remained frightened to even look out the window for fear of seeing the man again.

“They wanted to practice screaming loud enough for help to come,” he wrote, “I want to scream too.”

In a telephone conversation Wednesday morning, Pierce told the Daily Dot that the kids woke up crying several times in the night. “We just talked to them and held them and slept with the light on,” Pierce said.

Pierce doesn’t solely blame the man, opining on Twitter that “he’s clearly not receiving the resources he needs.” He said that they’ve dealt with these types of “terrifying homophobic stranger[s]” before, but the accusation that he and his husband are “pedophiles” and “rapists” is new.

“We’re just used to this tactic. There’s nothing scary about my family,” Pierce told the Daily Dot.

“We all know where that comes from. So thanks to Fox & [Rupert] Murdoch, J.K. Rowling & [Rep.] Marjorie Taylor Greene [R-Ga.], to the senators & priests & everyone else who harms kids & thinks it’s politically expedient to project onto gentle families like mine to stir up their lucrative culture war,” Pierce tweeted.

He added that the man was arrested after refusing to get off the train.

Thousands of people shared and reacted to Pierce’s story.

Most shared condolences or expressed outrage on his family’s behalf. Many also took aim at Republican politicians and talking heads. Last month, NBC News reported that lawmakers have filed a record 238 bills that would limit LGBTQ people’s rights thus far in 2022. Roughly half of the proposed legislation targets transgender people.

Proponents of such legislation claim it’s designed to protect parental and/or religious rights, children, or some combination thereof. Opponents say these bills are more about scoring points with the Republican Party’s hardline conservative base by reigniting a culture war over LGBTQ rights and acceptance, a characterization Pierce agrees with.

Pierce told the Daily Dot that his family lives in Los Angeles where they’d felt somewhat insulated from the anti-LGBTQ legislation sweeping the nation.

“My heart goes out to the poor families living in those places, but you know rhetoric doesn’t stand on one side of the state line,” Pierce said.

Many who responded to Pierce’s thread tagged Republicans.

“The GOP platform has consequences,” tweeted one.

Several brought up Republicans’ framing legislation like Florida’s “Don’t Say Gay” law as being “anti-grooming,” a homophobic and false concept that LGBTQ people are pedophiles.

“The rhetoric around calling LGBTQ people ‘groomers’ and threats to children has real repercussions that actually DO threaten children. Shut this down at every opportunity,” wrote @SKenson.

Pierce believes that the United States is at a crossroads.

“There are different fates for families like mine along each of those roads, and it will depend on how we will respond to this, this terror and bigotry that’s rearing its head right now,” he said.

“If we can come together and stop this, I have hope for this family and for young queer people who are considering having a family.”